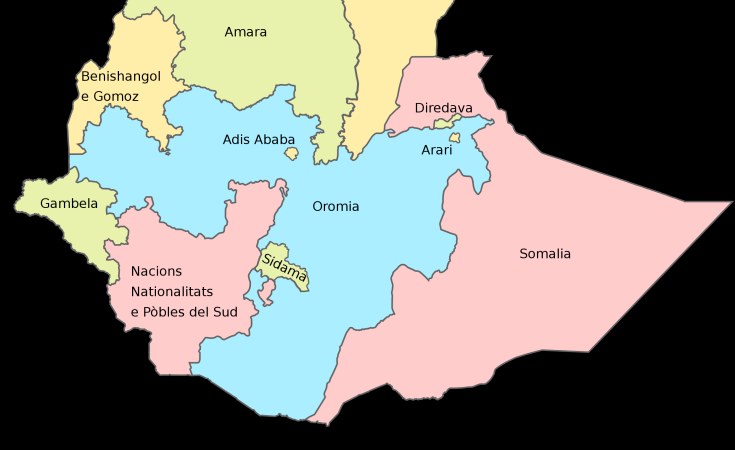 Jfblanc / Wikimedia Commons
A map of the regions of Ethiopia.
The Ethiopian Herald (Addis Ababa)

The official inauguration ceremony of State formation was held in Bonga town. During the occasion, the regional council unanimously approved draft constitution of the state.

The council elected Negash Wagesho as chief administrator for the newly established state.

Speaking at the occasion, Negash said the regime of TPLF group had been engaged in abusing the human and democratic right of people in the state for several years.

Constitutional right that has been witnessed today by exercising the right to self-administration is the result of reforms undertaken in the country that is has begun to bring about fruits to ensuring development and prosperity of the country, he said.

He noted that the new state will exert its efforts in collaboration with all Ethiopians to avert the attack of TPLF terrorist group and ensure sovereignty and territorial integrity of the country.

The chief administrator said his government will work hard to improve the livelihood of the people in the state, and exploit potential of resources in the state. The council also elected Wondimu Korta as speaker and Genet Mengesh deputy speaker of the state respectively.

It was indicated that Amharic language will be served as working language in the state. The formation of the new state came after the result of referendum held on September 30, 2021 which was in favor of creating autonomous state. The new state will be 11th state to join Ethiopia's Federation.