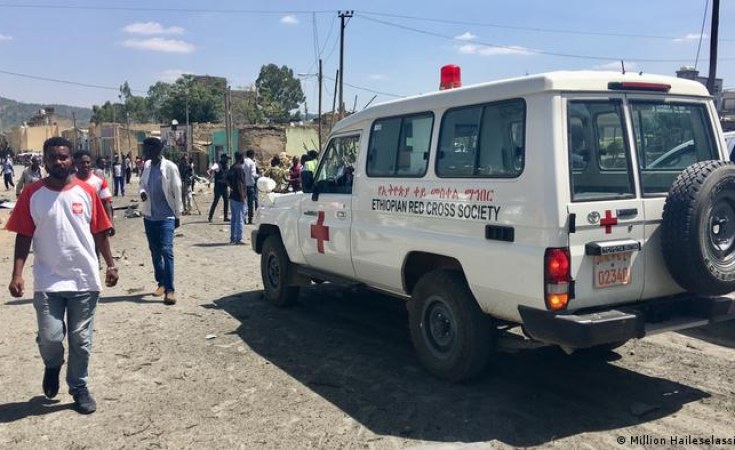 Growing pressure from the international community to end the violence is falling on deaf ears. As the conflict escalates, Prime Minister Abiy Ahmed himself is now on the front lines to personally conduct war operations.

Ethiopia's Prime Minister Abiy Ahmed, a Nobel Peace Prize winner and former soldier, arrived on the front lines of the ongoing Tigray conflict on Tuesday as a government spokesperson officially announced Wednesday. No details have been given on his precise location

Abiy's decision is being widely interpreted as an attempt to mobilize Ethiopians in the fight against Tigray People's Liberation Front (TPLF) forces.

"You could comment if it is wise or not, but it surely signifies a very serious situation in Ethiopia," Jan Abbink, a senior researcher at the African Studies Center at Leiden University in the Netherlands told DW.

Anticipating an escalation in violence amid fears that Tigrayan forces might reach the capital Addis Ababa in the coming days, some Western countries -- including Germany, France and the US -- have urged their nationals to leave Ethiopia as soon as possible.

This has fueled accusations in Ethiopia that Western powers are trying to sow panic in order to weaken the Abiy government.

"The prime minister believes he has been cornered and that international partners such as the US and the EU are pushing for his removal," Ahmed Soliman from the London-based research institute Chatham House told DW.

Perceived Western support for the Tigrayan forces "has been used to stoke this nationalist sentiment to mobilize resistance for the conflict," he added.

For instance, in an apparent warning shot to the West, Ethiopia on Wednesday ordered four of six Irish diplomats in the country to leave within a week's time over Ireland's stance on the conflict.

Before leaving the capital for the front lines Tuesday, Abiy again called for every able citizen in the country of more than 110 million people to join the fight.

Tens of thousands of Addis Ababa residents have joined defense groups, and in recent months there have been reports of forced conscription.

National heroes, including Olympic medalists Haile Gebrselassie and Feyisa Lilesa, have publicly announced their readiness to take up arms against the Tigray People's Liberation Front (TPLF), setting an example of loyalty to an increasingly besieged government.

Meanwhile, ire against the TPLF among Abiy's supporters is growing -- with many believing they threaten more than just the streets of Addis Ababa.

"One vision of the rebels is to fragment, Balkanize, crumble and delete the name Ethiopia from the world map," Yonas Adaye Adeto, of the Institute for Peace and Security Studies (IPSS) at Addis Ababa University, told DW, contrasting this image to what he called the prime minister's "vision of unity."

In view of the armed escalation, hopes for peace talks in the immediate future are waning.

US envoy Jeffrey Feltman on Tuesday told reporters he feared the "nascent" progress in mediation efforts with the warring sides could be outpaced by the "alarming" military developments.

Ethiopian observers are also pessimistic that any solution is possible through dialogue alone.

"Unless there is some kind of divine intervention, I don't see any chance for a peaceful resolution through dialogue, because the positions are highly polarized," Kassahun Berhanu, a professor of political science at Addis Ababa University, told news agency AP.

The TPLF's apparent unwillingness to negotiate was reinforced in a statement issued by its external affairs office, asserting that "any peace initiative whose principal objective is to save Abiy Ahmed from imminent demise is dead on arrival."

Before Abiy took office in 2018, the TPLF dominated the federal government for 27 years. A simmering political rift turned into open war in November 2020.

"The conflict has caused unimaginable anguish," said researcher Soliman, stressing that atrocities had been committed by both sides.

"Some might think it's really time for the elites to put their self-interest aside and build a societal order based on mutual understanding and inclusiveness," he added.

Analysts agree that the African Union (AU) is best placed to nudge both sides of the conflict into accepting a ceasefire and starting a dialogue. Former Nigerian President Olusegun Obasanjo is leading the AU's efforts in Ethiopia, where he has met with both Abiy and TPLF leaders. Calls for peace coming from Ethiopia's neighbors and allies are also "very consistent," explained Soliman.

"This message takes the emphasis away from an external interference in Ethiopia's internal affairs, aligning it with the continental cause within sub-Saharan Africa for the conflict to stop."

Etienne Gatanazi contributed to this article