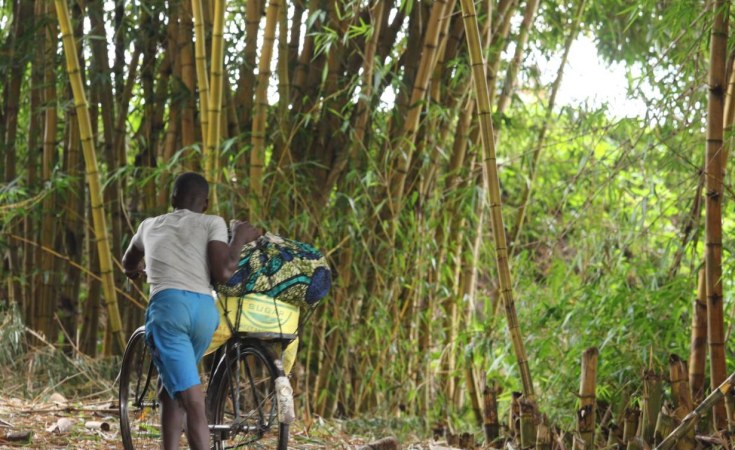 * Floods impact about 50,000 people in Uganda each year

Mbonagaija Nestoli knows how it feels to live in fear of the river.

Massive floods have regularly torn through his village of Rwakingi, in western Uganda, destroying farms and equipment. One, in 2019, ruined three-quarters of the land on which Nestoli grows bananas, yams and sugarcane.

But the 72-year-old farmer hopes he will soon no longer worry when the rain hammers down and the waters of the Mubuku River start to rise, thanks to stands of bamboo he has planted along the riverbank.

The bamboo - increasingly widely used as a flood defense in Uganda - acts like a wall when grown, slowing water pouring from swollen rivers.

"Bamboo has spreading roots which hold the soil very firmly and can allow water to still pass through while controlling the speed and strength," the farmer said.

The plant could also soon make it easier for Nestoli to support himself and his three grandchildren.

"When my bamboo has matured enough, I plan to sell some of it for building materials so that I earn an extra income," he said.

With climate change driving more frequent and devastating floods, some Ugandan communities are turning to bamboo barriers as a defense that can also provide fuel and an income.

"Bamboo is a wonder plant that can alter the challenges of climate change," said Bryan Toshi, co-founder of the Kampala-based Umoja Conservation Trust.

That includes "providing a sustainable, renewable source of charcoal, resistant construction materials and a sustainable, income-generating alternative to wood cutting."

Since 2013, community leaders and farmers' groups have been encouraging farmers like Nestoli to plant bamboo and indigenous trees along the riverbanks in flood-prone Kasese district.

Community leader Charles Nyamutare said he got the idea while attending a training session on bamboo growing run by the green group WWF.

"I sold (the idea) to the community and the response was, 'Let us try'," he said.

"Bamboo is now one of the most important interventions we are using to control flooding," he said.

Before turning to the plant, villagers in Kasese tried to hold back the waters with stone-filled cages, or gabions, Nyamutare added.

"But the floods would destroy them and we realised it was not sustainable," he said.

Communities who join the project - backed with funding from organisations including WWF and ECOTRUST, an indigenous conservation nonprofit - plant lines of bamboo and trees on either side of a river and fence the plantation off to protect the saplings from hungry animals, Nyamutare explained.

So far, communities have planted about 1.2 million bamboo plants, stretching 40 km (24 miles) along the Sebwe River and 10 km along the Mubuku River, he said.

As a result, "the flood intensity has been curtailed," Nyamutare said - though the bamboo can take some years to grow before it is strong enough to significantly curtail losses.

Each year, floods impact nearly 50,000 people in Uganda, leaving dozens dead and thousands displaced. The inundations cost the country about $62 million a year in economic losses, according to the World Bank.

Such worsening flooding is being seen in many places around the world as the planet warms, speeding evaporation and making rains heavier.

During a visit to Kasese, after flooding affected at least 30 villages there in July, Prime Minister Robinah Nabbanja promised to find long-term fixes.

In August, the environment ministry announced a 30 billion-shilling ($8.5 million) project to restore and protect the district's main river, the Nyamwamba.

It involves planting bamboo along the river's banks, as well as carrying out spot cleaning of the waterway and putting in place flood forecasting and early warning systems.

Bamboo offers a cheap and fast-growing way to reduce flood damage, said Evelyn Mugume, a senior environmental officer for Kasese, in an interview.

"Bamboo also has an economic value, which will help the community improve their financial status," she added.

From a single mother plant, a farmer can make more than 250,000 shillings ($70) a year selling bamboo for use in construction and as charcoal, said community leader Nyamutare.

"It's good business," he said.

'EATEN BY THE RIVER'

Sometimes, the floods wash away bamboo saplings before they have time to grow strong enough to stand up to the water, Nyamutare said.

Not everyone in the area is convinced that bamboo is the best solution either.

"We have some community members who resist, saying they prefer to use their land for other things," he said.

Hunwick, who has been planting and researching bamboo for nearly a decade, said communities could also plant more indigenous trees along riverbanks, and invest in water harvesting to catch more run-off before it can do much damage.

But Nestoli, confident his stands of bamboo will eventually protect his farm, is trying to persuade his neighbour in Rwakingi to plant as well.

"You can see how my neighbour's land is being eaten by the flooding river," the farmer said, pointing to a field of banana trees half-submerged in water.

"I even offered to plant bamboo for him for free. But he has insisted on using his land for agriculture only."