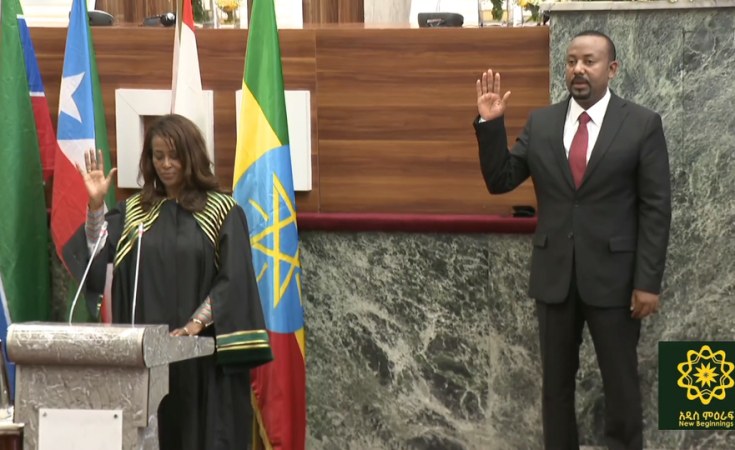 Ethiopia's Prime Minister Abiy Ahmed has arrived at the frontlines where government forces are battling rebels from the Tigray region, according to state media. The sudden military escalation has prompted US-led international calls for a diplomatic solution and an immediate ceasefire to the year-long conflict.

State news agency Fana reported on Wednesday that Ahmed had reached the frontline to provide support to his troops, while his deputy Demeke Mekonnen was handling "regular activities".

State media did not broadcast images of him in the field, and officials have not responded to requests for details about his whereabouts.

Earlier on Wednesday, hundreds of new army recruits took part in a ceremony held in their honour in the Kolfe district of Ethiopia's capital Addis Ababa.

The recruits in Kolfe sported t-shirts emblazoned with a picture of Abiy in uniform and the words: "We have a historic responsibility to defend the free name of Ethiopia."

"We are now in the final stages of saving Ethiopia," said Abiy, who only two years ago was awarded the Nobel Peace Prize for securing a peace deal with neighbouring Eritrea.

Addressing reports of Abiy at the front, the US State Department late Wednesday warned "there is no military solution" to Ethiopia's civil war.

"We urge all parties to refrain from inflammatory and bellicose rhetoric, to use restraint, respect human rights, allow humanitarian access, and protect civilians," a State Department spokesperson said.

A day earlier Washington's special envoy for the Horn of Africa, Jeffrey Feltman, said that "nascent progress" risked being "outpaced by the military escalation by the two sides".

Other foreign envoys also have been frantically pushing for a ceasefire, though there have been few signs a breakthrough is coming.

Thousands of people have been killed since then, triggering a humanitarian crisis that the UN says has left hundreds of thousands on the brink of famine and displaced more than two million.

The TPLF has since pushed into neighbouring Amhara and Afar regions, and this week it claimed to have seized a town just 220 kilometres from the capital.

Prominent distance runner - marathoner and Olympic silver medallist Feyisa Lelisa said he was keen to follow Abiy's lead, describing it as "a great opportunity" to defend the country.

"When a leader leaves his chair ... and his throne it is to rescue his country. His focus is not to live, but to rescue this country, and I sobbed when he said 'follow me' and went to the front line," another of the recruits, 42-year-old driver Tesfaye Sherefa, told AFP.

Meanwhile, the scramble to evacuate foreigners is continuing, three weeks after the government declared a state of emergency and ordered residents to prepare to defend the capital.

Britain on Wednesday urged its nationals to leave Ethiopia as soon as possible, citing the potential for fighting to move closer to the capital, Addis Ababa.

"I am urging all British nationals -- whatever their circumstance -- to leave immediately while commercial flights are readily available and (the airport) remains open," Africa minister Vicky Ford said in a statement.

The United Nations said it had ordered the immediate evacuation of family members of international staff, following decisions made by France, Germany, Italy and the United States on Tuesday.

Ethiopia ordered four of Ireland's six diplomats serving at its embassy in Addis Ababa to leave the country by next week, the government in Dublin said on Wednesday.

The foreign ministry said the Ethiopian authorities indicated the decision "was due to the positions Ireland has articulated internationally ... on the ongoing conflict and humanitarian crisis in Ethiopia."

Ireland, involved in major aid funding to Ethiopia, was a signatory to a 5 November UN Security Council statement that called for a ceasefire in the north of the country.