Africa: Commitments Signed to Build an Electric Battery Industry in the DRC 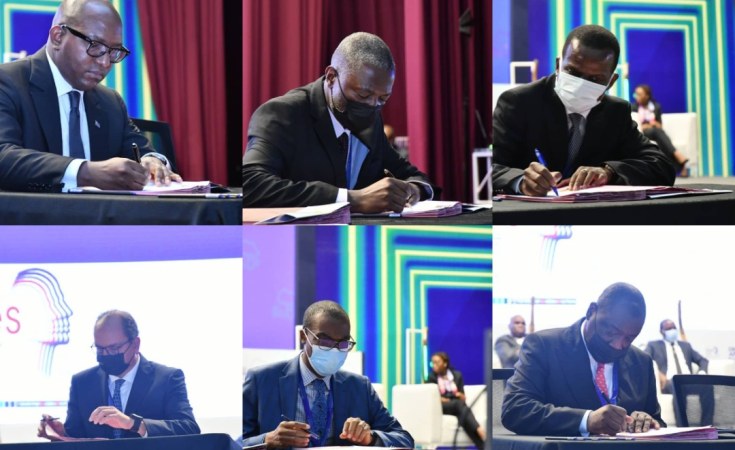 UNECA
Signing of commitments for the development of a battery minerals industry in the Democratic Republic of Congo (DRC), on November 24, 2021 in Kinshasa within the framework of the DRC-AFRICA Business Forum 2021
allAfrica.com
By Bacary Dabo

The DRC-Africa Business Forum 2021 kicked off with a bang on Wednesday, November 24 in the Congolese capital. A series of firm commitments have been signed for the development of a battery minerals industry in the Democratic Republic of Congo. This in the hope of getting started within two years.

(Special Envoy to Kinshasa) - A new era has opened in the process of transforming the African economy.

The DRC-Africa Business Forum 2021 started with a bang on Wednesday, November 24 in the Congolese capital. A battery of firm commitments was signed for the development of a battery minerals industry in the Democratic Republic of Congo (DRC). The plan is for the project to start within the next two years.

From the Democratic Republic of Congo (DRC), Africa will develop a regional industry of electric battery minerals and later electric vehicles and clean energy. The Government of the DRC, the United Nations Economic Commission for Africa (UNECA), the African Export-Import Bank (Afreximbank), the African Finance Corporation (AFC), the African Development Corporation (ADC), and AVZ Minerals have all signed memoranda of commitment to this end.

The signing sharpens the commitment of Bosh, a German multinational, whose main centers of activity are the manufacture of equipment for the automotive industry; the manufacture of power tools and household appliances; industrial and building techniques; packaging techniques. At the meeting, Bosh made a commitment to work with African actors engaged in the development of this electric battery industry in the DRC.

UNECA
The theme of the DRC Africa Business Forum, which took place Nov 24-25 in Kinshasa, DRC, was "Economic Integration of the Congolese in the Value Chain of the Electric Battery Industry through Innovative Financial Solutions." In his speech, the DRC President Félix Tshisekedi referenced the author Frantz Fanon when he said, “Africa is shaped like a gun and Congo is the trigger.” With its cobalt (70% of global production) & other battery minerals, the DRC must play frontline role in greening the world’s economy.

The head of state of the DRC and current Chairman of the African Union Commission (AU), Félix-Antoine Tshisekedi Tshilombo, expressed a strong political commitment to the project. "The machine is now launched, it is necessary to start right after this forum."

To put words into action, stakeholders have agreed to create a Battery Council in the DRC in order to set up a special financial vehicle to facilitate private investments and the participation of the population. In addition, they committed to the development of the battery minerals industry in the DRC.

For Ms. Vera Songwe, Executive Secretary of the UNECA, these commitments signed set apart this forum in Kinshasa from previous meetings.

As if to put pressure on the stakeholders, Ms. Songwe hopes to witness, within the next two years, the effective start of the project. "From now on, there is no question of going backwards. We must take action. In her opinion, Africa must move from the political debate to the economic debate which passes by the cobalt.

In this same dynamic, the President of Zambia, Mr. Hakainde Hichilema, invited governments, the private sector, and populations to work on reducing the gap to reach the objectives in the shortest amount of time. According to him, "Zambia is willing to cooperate with the DRC and other African countries to achieve this dream."

In the reference to achieving the African dream of an electric battery industry in the DRC, Ms. Bineta Diop, Special Envoy of the Chairperson of the African Union Commission on Women, Peace and Security, expressed that the ECA is rewriting the narrative of Africa with this initiative, and its economic effects will spread throughout the continent. According to her, Africa needs strong leadership to drive this economic transformation.

UNECA
Ms. Vera Songwe, Deputy Secretary-General of the United Nations and Executive Director of the Economic Commission for Africa (ECA)

The President of Zambia, Hakainde Hichilema, advocated for a collegial approach for African countries such as the DRC, Angola, Madagascar in the sharing of resources such as cobalt, nickel and manganese, necessary for the production of electric batteries.

Mr. Hichulema is offended by the fact that eight of the 15 mineral producing countries in the world are African while the value added in this activity is retained in China, South Korea, the United States, among others.

For him, African countries must work intelligently while being open to the rest of the world, including developed countries. In his opinion, the technology exists as well as the financial means and natural resources. What now remains to combine forces to achieve the objectives.

The Director General of the Arab Bank for Economic Development in Africa (BADEA), Dr. Sidi Ould Tah, for his part, believes that this initiative will be a milestone and the fact that the development banks got together for the success of this initiative shows that Africa has the means of its policy.

In the same vein, the Zambian president believes that collectively, "we must implement this African vision on the electric battery industry, which is a guarantee for production capacity." He adds that there is the need to support this vision with government coordination and the involvement of the private sector. He also calls for the synchronization of continental strategies and regional value chains.

Previous Story
The Pitfalls to be Overcome for the Integration of the Congolese in the Value Chain of the Electric Battery Industry
Next Story
Moving Africa up the Ladder in the Battery, Electric Vehicle (BEV) and Renewable Energy Value Chain and Market

Moving Africa up the Ladder in the Battery, Electric Vehicle (BEV) and Renewable Energy Value Chain and Market