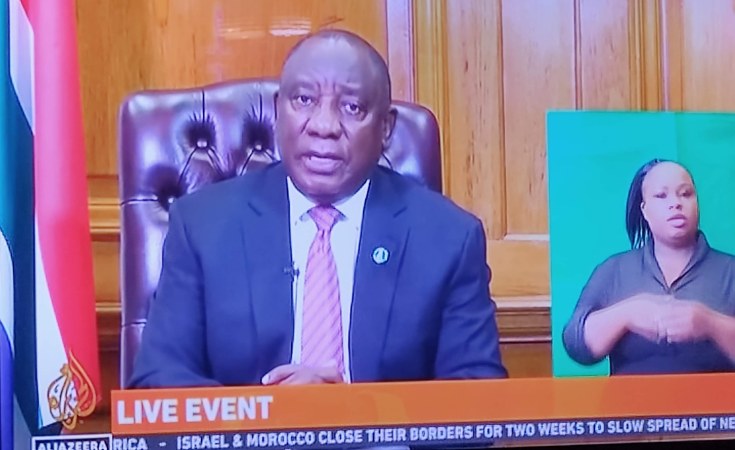 President Cyril Ramaphosa has called on all those countries that have imposed travel bans on South Africa and other Southern African countries to urgently reverse their decisions.

He urged them to lift the travel bans they have imposed before any further damage is done to the countries' economies and to the livelihoods of people.

"There is no scientific justification for keeping these restrictions in place. We know that this virus, like all viruses, does mutate and form new variants," said the President.

He was addressing the nation on Sunday evening on progress in the national effort to contain the COVID-19 pandemic, at the Union Buildings.

Earlier this week, South African scientists identified a new variant of the Coronavirus that causes the COVID-19 disease. The World Health Organisation has named the variant Omicron and has declared it a 'variant of concern'.

The Omicron variant was first detected in Botswana and subsequently in South Africa, and scientists have also identified cases in countries such as Hong Kong, Australia, Belgium, Italy, the United Kingdom, Germany, Austria, Denmark and Israel.

"We are deeply disappointed by the decision of several countries to prohibit travel from a number of Southern African countries following the identification of the Omicron variant.

"This is a clear and completely unjustified departure from the commitment that many of these countries made at the meeting of G20 countries in Rome last month."

The President said the travel restrictions are "unjustified and unfairly discriminate against our country and our Southern African sister countries".

"The prohibition of travel is not informed by science, nor will it be effective in preventing the spread of this variant. The only thing the prohibition on travel will do is to further damage the economies of the affected countries and undermine their ability to respond to, and recover from, the pandemic," he said.

He added that the likelihood of the emergence of more severe forms of variants is increased significantly where people are not vaccinated.

"That is why we have joined many countries, organisations and people around the world who have been fighting for equal access to vaccines for everyone. We have said that vaccine inequality not only costs lives and livelihoods in those countries that are denied access, but that it also threatens global efforts to overcome the pandemic."

President Ramaphosa said the emergence of the Omicron variant should be a wake-up call to the world that vaccine inequality cannot be allowed to continue.

"Instead of prohibiting travel, the rich countries of the world need to support the efforts of developing economies to access and to manufacture enough vaccine doses for their people without delay," said President Ramaphosa.