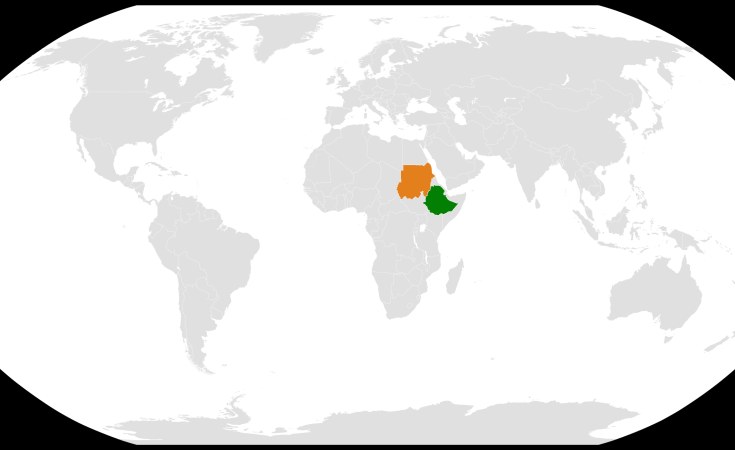 PlanespotterA320/Wikimedia Commons
A map showing the location of Ethiopia (in green) and Sudan (orange).
The Nation (Nairobi)
By Mawahib Abdallatif

Sudan's military is accusing Ethiopian counterparts of firing first in the Saturday incident that caused half a dozen deaths in the Khartoum camp in a border row between the two countries.

In a press statement issued on Sunday, the military, referring to the al-Fashqa al-Saghira border areas, Barakat Noreen claimed the Sudanese forces were ambushed by Ethiopian troops ostensibly to intimidate local farmers going about their harvests.

The Office of the Spokesman for the Sudanese Armed Forces announced that "the Sudanese forces repelled the attack, inflicting heavy losses on the attackers in lives and equipment, and counted a number of deaths."

Khartoum appeared to counter earlier reports that indicated its forces had lost as many as six soldiers and several others wounded in a fire exchange near Amhara region of Ethiopia.

A military source had initially told Nation.Africa that two Sudanese soldiers had on Saturday been killed in crossfire before further updates indicated six.

The two countries have bickered over the flow of their common border in the area for nearly a century, with previous tiffs often swept under the carpet for the more concerning regional cooperation.

But this was the first serious crossfire between the two sides ever since Sudan deployed troops to the area earlier in December 2020. Addis Ababa has demanded the removal of troops before any talks can start on drawing the boundary. But Khartoum insists the troops are providing adequate security for farmers against raids from Ethiopian militia groups.

The area is deemed fertile with farmers growing crucial staple foods. But the lack of a demarcated boundary means no side can really know which territory they are on which makes it difficult to predict clashes. In the past, peace was upheld as Ethiopian labourers were allowed to freely work on Sudanese farms.

Sudan's military says their presence in the area was also protecting Amhara farmers from raids by militia and to block a supply line for the Tigray Liberation Front (TPLF) forces that have been fighting the Ethiopian government forces for more than a year in the Ethiopian Bahir Dar region.

The area of Al-Fashqa is about two million acres, and extends for a distance of 168 km with the Ethiopian border out of the total border distance of Gedaref State with Ethiopia, which is about 265 km.

Last December, the Sudanese army imposed its control over the lands of Al-Fashqa, after it was seized for a quarter of a century by what Khartoum said were "Ethiopian gangs", while Addis Ababa accuses Sudan of controlling Ethiopian lands, which Khartoum denies.