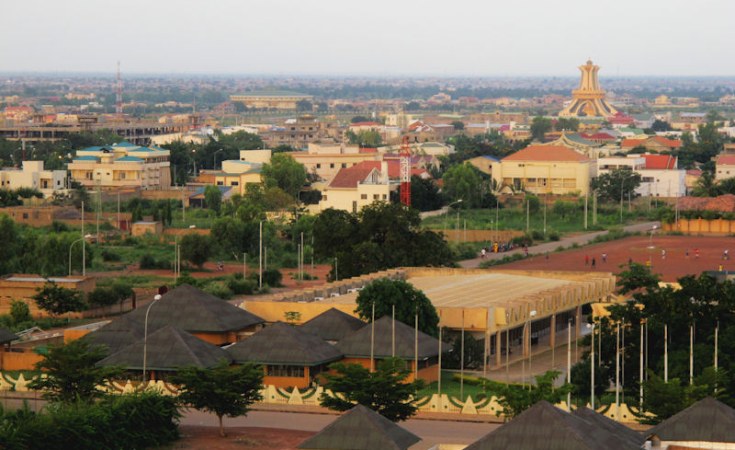 Police fired tear gas at protesters as they burned tires and ransacked a government building in Ouagadougou. Citizens of the capital of Burkina Faso are upset about jihadist violence and a recent attack.

Police used tear gas on demonstrators as they tried to rally in a central square in Burkina Faso's capital, Ouagadougou.

Protesters -- frustrated with the state's failure to stop a wave of Islamic militant violence -- marched Saturday, with some ransacking a government records building.

A number of other demonstrators burned tires and trash cans and erected barricades.

Valentin Yamkoudougou, a spokesperson for "Save Burkina Faso," one of the groups behind the protest, told the Reuters news agency that since President Roch Kabore has been at the helm, "Terrorists are spreading desolation in this country."

"We ask for his immediate resignation," he said.

The protests on Saturday come a week after the government shut down mobile internet, ostensibly for national security purposes. More protests have been planned for the coming weeks.

What sparked the protests?

Activist groups called for renewed protests after a recent surge in attacks, most prominently the assault in Inata that killed 49 military police officers and four civilians on November 14.

The Inata assault was the deadliest attack security forces in Burkina Faso have endured since the insurgency kicked off in 2015. The attack has fueled anger against both the government in Ouagadougou and the French military forces that support it. Protests against Kabore's government have been sporadic since then.

"We will put in someone who is competent to assure the security of the nation," protester Isaac Pagberam said.

He added, "We've already lost two-thirds of our territory, nobody can travel the country in peace."

A week ago, in the city of Kaya, protesters prevented a French military convoy from getting through on its way to Niger. At least four were injured after French forces fired warning shots.

How are officials reacting?

President Roch Kabore told the nation in a speech on Thursday that he would end the "dysfunction" within the military. He said so amid reports that troops at the Inata base were without food for weeks prior to the attack.

The EU has released a statement calling for a return to peaceful social and political life.

The UN's special envoy for West Africa said Thursday he was concerned and warned against a military coup as three have occurred in neighboring nations in just the past year alone.