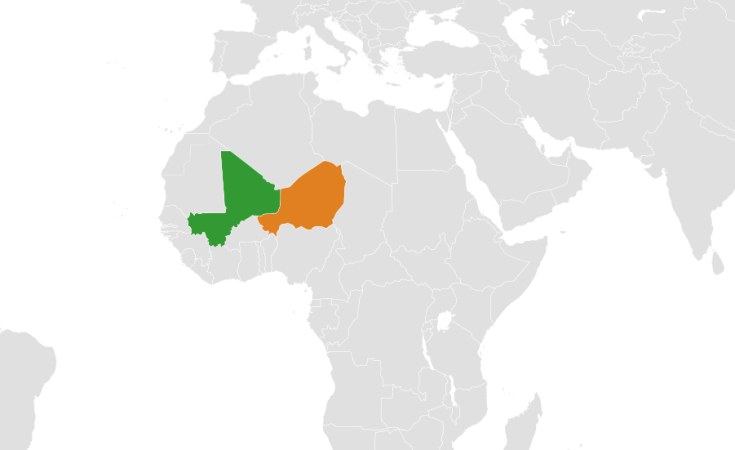 The Nigerien government says two people were killed and 18 wounded after a French military convoy heading to Mali was blocked by protestors angry at the failure of French forces to reign in terrorism in the region.

The armoured vehicles and logistics trucks had crossed the border on Friday after being blocked in Burkina Faso for a week after demonstrations about the lack of security there.

People have been protesting the failure of both the Burkinabè authorities and French forces to stop mounting violence by Islamist militants.

Anger about France's military presence in its former colonies has been rising in Niger, Burkina Faso and other countries in west Africa's Sahel region where France has thousands of troops to fight affiliates of al-Qaeda and Islamic State.

Last weekend, hundreds of people in the Burkinabè city of Kaya blocked the French convoy, which is on its way from Cote d'Ivoire to Mali.

It was able to leave Burkina Faso on Friday but ran into new protests on Saturday morning less than 30km across the border in the western Niger town of Tera, where it had stopped to spend the night.

"In its attempt to extricate itself, it (the French forces) used force. Sadly, we deplore the death of two people and 18 injuries, 11 of them serious," Niger's interior ministry said in a statement. "An investigation has been opened to determine the exact circumstances of this tragedy and determine responsibility."

🇳🇪#Niger #Tera The blockade of French soldiers in Tera (Niger). This is part of the convoy which was able to escape from the clutches of Kaya (Burkina). Face to face tense, tear gas play of French soldiers on civilians. From Gote to Tera the population charges the French. pic.twitter.com/WAPGBJZBHi -- Gabrian (@511ZGS) November 27, 2021

French military spokesperson Col Pascal Ianni told Reuters that French soldiers and Nigerian military police had fired warning shots to disperse protesters who were trying to pillage and seize trucks but said he could not confirm or deny the reported casualties.

The convoy was later able to continue towards the capital, Niamey, Ianni added.

Video shared by a local official showed the protesters, mostly young men, shouting "Down with France," as black smoke rose from a burning barricade.

France intervened in Mali in 2013 to beat back militants who had seized the desert north, before deploying soldiers across the Sahel. While it has killed many top jihadist leaders, violence has continued to intensify and spread in the region.

In remarks broadcast on national television on Friday, Niger's president, Mohamed Bazoum, defended the French presence in the Sahel. "Of all the countries at our side in the fight against terrorism, France has sacrificed the most," he said, adding its departure would lead to "chaos".

France has 5,100 troops in the Sahel under its Barkhane operation which spans five countries: Burkina Faso, Chad, Mali, Mauritania and Niger.

On 10 June, President Emmanuel Macron announced a major drawdown of France's military presence in the Sahel where forces have been battling jihadist insurgents for nearly a decade.