South Africa's Renewal Begins With the Rule of Law 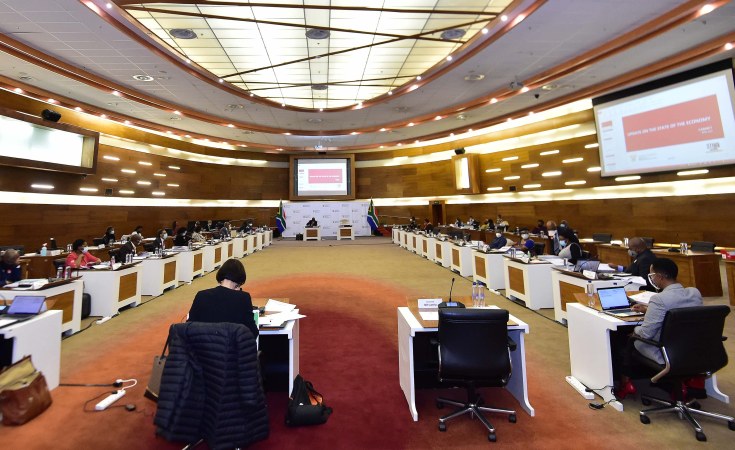 A competent and trusted executive-level official is needed to drive the country's criminal justice reform.

South Africa's prosperity depends on the rule of law, trust between police, prosecutors and the public, and a criminal justice system that treats all people fairly. These were some of the key takeaways from a week-long exchange between top German and South African police and prosecutors in Munich in October.

It's estimated that between 2014 and 2019, South Africa lost R1.5 trillion to corruption, while the cost of violence in 2021 is likely to be 15% of GDP. Reforming the criminal justice system to address such harms, inspire trust in the state, and restore economic confidence was a focus of the trip to Germany.

South Africa's President Cyril Ramaphosa was elected on an anti-corruption ticket in 2018 and has taken steps to deliver on his promises. He's appointed new heads for the Directorate for Priority Crime Investigation, National Prosecuting Authority (NPA) and South African Revenue Service. He has strengthened the Special Investigating Unit, established the Investigating Directorate in the NPA and a National Security Council, and hired a National Security Adviser.

Despite Ramaphosa's efforts, few perpetrators of grand corruption or serious organised crime have been prosecuted

Despite this, the damage of over a decade of poor governance and state capture under the Zuma administration mean that few perpetrators of grand corruption or serious organised crime have been brought to book. This includes the alleged instigators of the July unrest. Weak rule of law has compounded cycles of deteriorating investor confidence, a stagnating economy and rising unemployment.

When citizens perceive the state as corrupt, unable to keep them safe or create jobs, they're more likely to engage in illicit economic activities, avoid tax and use personal or vigilante violence to solve problems. Unchecked corruption and violence create conditions of societal unravelling.

During the Europe visit, German prosecutors and police and their South African counterparts agreed that the primary role of the democratic state was to create a safe, secure environment for its people. This was best achieved through the equal application of the rule of law.

Reflecting on this, Nelson Mandela Foundation CEO Sello Hatang said, 'Security for all is promised by both the South African and German constitutions, but we too often fail to deliver it for our people. ... We must judge a country by how it creates a safe environment for all its citizens, particularly its most vulnerable people.'

The UK's night-time economy was the country's fifth largest industry in 2019, accounting for 8% of jobs

Germany differs because this principle is spearheaded by police and prosecutors whose high-level goals are 'truth and justice.' The South African approach involves achieving crude statistical performance targets that may look good on paper but fail to improve public trust or safety.

In Germany, police and prosecutors can enforce the law without political interference and approach all they do with the imperative of promoting trust in the state. For this reason, the Bavarian Police is one of the most trusted organisations and sought-after employers across both public and private sectors.

Contemplating the implications of this message, head of the South African Police Service (SAPS) contingent, Deputy-National Commissioner Lt-Gen Liziwe Ntshinga, noted that, 'Law enforcement agencies can only gain the public's trust if they perform their duties as competent, respectful professionals.'

Similarly, National Director of Public Prosecutions Shamila Batohi suggests that if South Africans see and believe that the country's law applies to all equally, trust in the state will rise. This will allow for investment and economic activity, more jobs and a growing tax base, and a government better able to provide services to millions of people in need.

An example of this potential is the night-time economies of more peaceful industrial states. At night, many South Africans stay at home, neither earning nor spending money. With improved safety, this could instead be a significant period of productivity and entertainment with positive spinoffs in well-being, employment and economic growth.

In the United Kingdom for example, the night-time economy was the country's fifth largest industry in 2019, accounting for 8% of all jobs. But for this to develop, people must feel safe leaving their homes at night, keeping their businesses open, travelling on public transport, carrying cash, and interacting with strangers after dark. None of these is common in South Africa.

However, this is the South Africa envisaged by the government's 2012 National Development Plan (NDP) - where all people are safe and feel safe, and where dignity and opportunity are abundant. Yet the notable criminal justice reforms in the NDP and numerous other reviews and policy documents spanning the past 15 years have not been implemented.

Ramaphosa should appoint a member of the executive to coordinate and manage implementation of the seven-point plan in the 2007 criminal justice review adopted by the cabinet and reiterated in the NDP. This individual - who shouldn't have executive powers - should lead the realignment of the criminal justice system, its performance measures and targets, budgetary allocations, generation and use of evidence-based practices, and more.

In turn, police and prosecution heads must hold the executive, each other and those below them accountable to the law, to their respective codes of conduct, and public service values.