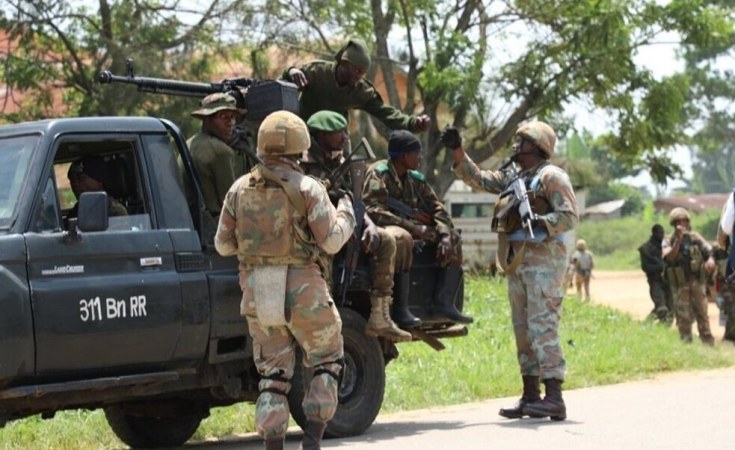 Uganda has deployed soldiers into the neighboring Democratic Republic of Congo, as part of a joint operation with the Congolese military. The troop movement followed bombardments against posts held by the Islamist ADF.

Hundreds of Ugandan soldiers in armored vehicles crossed the border into the eastern Democratic Republic of Congo (DRC) on Wednesday, witnesses said, as part of a joint operation with Kinshasa.

Congo has said special forces from both countries are being deployed to secure bases used by the Islamist-affiliated Allied Democratic Forces (ADF) militia.

What's happening on the ground?

The Ugandan military started its deployments into Congo on Tuesday, having already launched air and artillery strikes against ADF targets from Ugandan territory.

"They are arriving aboard armor-plated cars, with escorts from members of the local security services," Tony Kitambala, a freelance journalist based in North Kivu province, was cited as saying by the AFP news agency.

Another witness, a resident of the border town of Nobili, reported seeing tanks.

The pre-incursion bombardments were aimed at several ADF positions in North Kivu, as well as in the neighboring Ituri province to the northeast.

The Ugandan armed forces said the raids had successfully hit their targets, with ground operations to follow that would hunt down "terrorists."

A Congolese military spokesman said "search and control" operations were underway at the bombarded ADF locations.

According to one DRV military officer, Congolese troops were headed towards Beni, the capital of North Kivu province, from neighboring South Kivu.

Congo has promised that a situation report on the mission will be made public. There was no initial official indication of how many troops had been deployed or how long the operations will continue.

What is the ADF?

Historically, the ADF is a Ugandan rebel coalition. It was mostly comprised of Muslims opposed to Ugandan President Yoweri Museveni, who has led the country since 1986.

The ADF has been active since the mid-1990s and was pushed out of Uganda after trying to mobilize support.

It became embedded in places such as North Kivu in Congo and engaged with other armed groups. The group came to be treated as one of the deadliest among scores operating in eastern Congo.

The group has operated alongside fighters from groups supportive of the former regimes of Milton Obote and Idi Amin, who felt sidelined by Museveni's politics. ADF members have also been linked to rebels engaged in a drawn-out fight for greater independence for communities on the borders between Uganda and Congo.

According to Congo's Catholic Church, the ADF has killed some 6,000 civilians since 2013. Another monitor, the Kivu Security Tracker, blames the group for 1,200 deaths since 2017.

While the ADF pledged allegiance to the so-called "Islamic State" (IS) in 2019, United Nations researchers say they have found no evidence of IS command and control.

However, some ADF attacks in eastern DR Congo have been claimed by IS since April 2019. And in March this year, the United States placed the ADF on its list of "terrorist" organizations linked to IS.

Ugandan authorities accused the ADF -- or a local affiliated group -- of carrying out or planning a string of attacks this year.

Four people were killed and 33 wounded in twin suicide bombings in Kampala in November, with police linking this to the ADF.