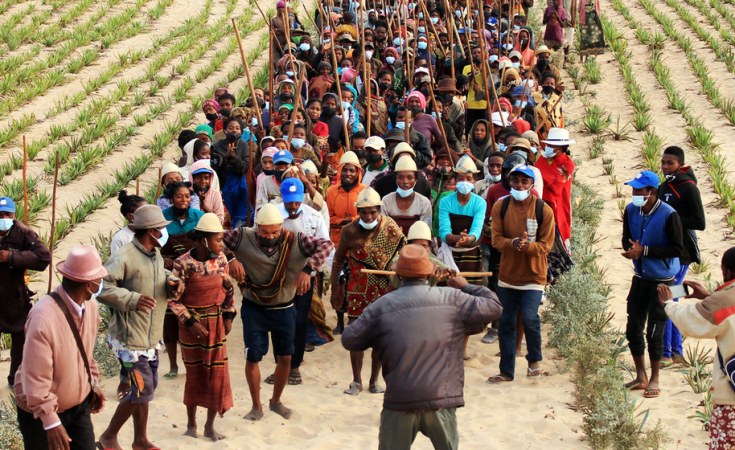 UN Madagascar
The community in Maroalomainty in the south of Madagascar has planted vegetation to mitigate the effects of climate change.
Thomson Reuters Foundation (London)
By Kim Harrisberg

Durban — Widespread poverty, lack of irrigation, deforestation and COVID-19 restrictions are having a bigger effect than global warming, scientists say

Madagascar was thought to be facing one of the world's first climate-induced famines but new data suggests global warming is playing only a small role in surging hunger there, with poverty, COVID-19 and natural rain variability the key drivers.

Correctly assessing what is behind such crises is key to ensuring the problems driving them are effectively addressed, particularly as climate change pressures tick up, researchers said.

"When you just blame everything on climate change then you take all the agency away from local decision makers to actually deal with the disasters," said Friederike Otto, co-head of research initiative World Weather Attribution (WWA).

"Climate change is a threat multiplier, but with this particular drought it was more the natural rain variability, COVID and the very high vulnerability that came together," the climate scientist told the Thomson Reuters Foundation in a video call.

In Madagascar, severe hunger is estimated to have touched more than 1.1 million people, with 14,000 just a step away from famine as the African island experiences its worst drought in four decades, according to the U.N. World Food Programme (WFP).

But the WWA - a group of climate scientists that work to determine the climate change fingerprint in extreme weather and disasters - found climate change has likely played a minimal role in Madagascar's crisis.

By analysing weather records, climate projections and computer simultations, they found the the island's reduced rainfall was largely due to natural variation.

Instead, widespread poverty, heavy reliance on rain-fed crops and herding, plus the economic devastation of COVID-19, were the major contributors to this year's food crisis.

Although climate change is not a major driver of drought-induced hunger currently, researchers said adapting to a changing climate was vital for Madagascar to resist future shocks.

The study's researchers estimate there is a one in 135 chance of a drought like the current one occurring in any given year in Madagascar - but underlying risks dramatically increase vulnerability when such droughts occur.

Madagascar is one of the world's poorest countries. In the south of the island, where the current food crisis is worst, more than 90% of people live in poverty so have fewer resources to face drought, according to WWA.

As well, about 80% of people in the south depend on largely rain-fed agriculture, according to the International Federation of Red Cross and Red Crescent Societies (IFRC), a humanitarian group.

COVID-19 has also stopped many islanders travelling in pursuit of work, unleashing yet more hardship.

"When most people survive on low income and rely on year-to-year crops, the effects of prolonged droughts or flooding can be devastating," Maarten van Aalst, director of the Red Cross Red Crescent Climate Centre, said in a statement.

"What we are seeing with this event in Madagascar shows that in many cases we are not even prepared for today's climate."

If such changes aren't made, even slight shifts in climate patterns could be "absolutely catastrophic" for Madagascar, Otto said.

Humanitarian organisations say people in the south of Madagascar are resorting to desperate measures to survive the drought, even eating locusts, leaves and tubers that can cause stomach pain.

Water-borne diseases are on the rise, and uncertainty associated with the situation is boosting school dropout rates, gender-based violence and child abuse.

"People in many areas have been forced to sell all their household belongings as a result of severe debt, leaving them unable to cook food or feed their families," said Denis Bariyanga, IFRC's operations coordinator.

The urgent needs, alongside a lack of adequate funding, mean spending on immediate solutions - such as food relief - takes preference over long-term fixes, Bariyanga said.

And while climate change may be off the hook for this crisis, Otto said only a fool would ignore rising climate threats.