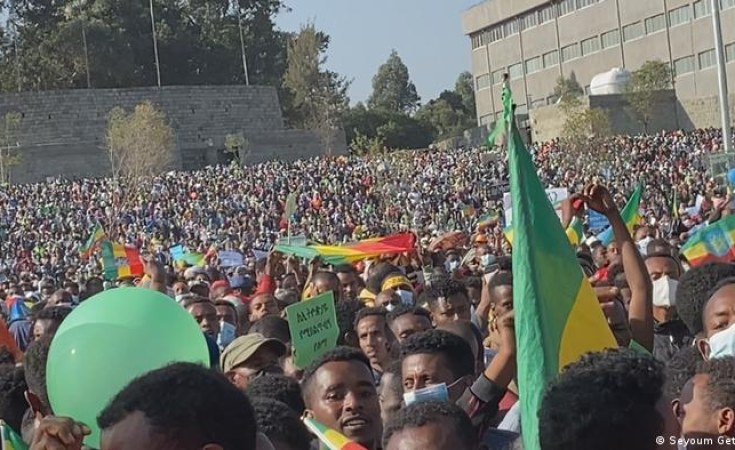 Washington — Armed with placards that read "Stop BBC," "Stop CNN" and "Stop FAKE news on Ethiopia," supporters of Ethiopia's government are protesting in cities across the world.

Their demand: an end to what they see as biased coverage of the war in Ethiopia. Many blame international media outlets for what Prime Minister Abiy Ahmed has called "a sophisticated narrative war waged against the nation."

The Nobel Peace Prize laureate was praised for releasing journalists and supporting a free press when he came to power.

But more recently he said on Twitter that journalists are "using disinformation as a pathway for their sinister moves. Each Ethiopian must play a role in pushing back and reversing the distorted narrative."

His comments are backed by action from the country's government and media regulator, both of which have issued warnings and restrictions for foreign and local media.

Further guidance came from the country's State of Emergency Operation Command on November 25, in the form of four rules that included bans on sharing details of military activity and updates on the front line, and assisting what Ethiopia deems to be terrorist groups.

Authorities have said action will be taken against those who use freedom of speech as a pretext to "support the terrorist group either directly or indirectly" -- an apparent reference to the Tigray People's Liberation Front, which Ethiopia's government designated a terrorist group.

The ruling could be used to block reporting on the TPLF or the Oromo Liberation Army, a rebel group that is also fighting the central government.

The regulatory Ethiopian Media Authority has already warned foreign outlets including CNN, BBC, Reuters and The Associated Press about reporting that it said "sowed seeds of animosity among people and compromised the sovereignty of the country."

The authority on November 19 threatened to revoke licenses and said the outlets had failed to "rectify journalistic misconduct" previously flagged.

The warning is the latest example, observers say, of Ethiopian efforts to discredit, intimidate or block reporting on the conflict. The federal government has repeatedly accused foreign media of sympathizing with or supporting the TPLF in their coverage of the war.

Over a dozen journalists have been arrested since fighting broke out in November 2020. At least one foreign journalist was expelled, and in July, the license of the news website Addis Standard was briefly revoked.

As a VOA affiliate, the station relied on the U.S. broadcaster for foreign news content. But it stopped airing those segments after receiving the order.

VOA has called on the media regulator to reconsider its decision.

"The order restricts the free flow of information to the citizens of Ethiopia and undermines press freedom," VOA acting Director Yolanda Lopez said in a statement at the time.

Fitsum Arega, Ethiopia's ambassador to the U.S., did not respond to VOA's request for comment sent via a messaging app. Email requests to the prime minister's office and to spokesperson Billene Seyoum went unanswered.

Government officials have previously said the measures are needed to address inaccurate or biased reporting.

"Coverage had been hijacked by the operatives affiliated with the TPLF, who are residing in different parts of the Western world," Dina Mufti, a spokesperson for Ethiopia's Ministry of Foreign Affairs, told VOA earlier this year.

A few days before the Ahadu order, two of the broadcaster's journalists were arrested on accusations of circulating false information.

The charges related to an October 22 interview in which an official said Tigrayan forces had captured the town of Hayq in the country's Amhara region.

Other media outlets including VOA have spoken with people who fled the town and similarly stated that it had been occupied by Tigrayan forces.

Ahadu later retracted its report and issued an apology, saying the information it had received was incorrect, according to a lawyer for the two journalists and the news website Ethiopia Insider.

Ahadu journalists Luwam Atikilti and Kibrom Worku were detained and questioned, according to their lawyer. Luwam was released after about 20 days, but police in Addis Ababa appealed to remand Kibrom.

"I have to say that what is happening here is not exactly surprising, given the experience of the past one year," said Muthoki Mumo, the sub-Saharan representative of the Committee to Protect Journalists.

CPJ criticized the new state of emergency, saying that it could allow Ethiopia to silence the press and public debate over the war.

"We are of course concerned about how this law will be implemented and whether it will be implemented to the detriment of free reporting," Mumo said. "A very valid fear, again considering the arrests and the violations that we've seen over the last one year, considering that the state has demonstrated itself as quite eager to control the narrative around this war and quite willing to take extreme steps to control that narrative."

The work of journalists is also being hampered by regular internet blackouts in the Tigray region and elsewhere.

Blackouts have affected Tigray since the conflict began in November 2020 and have spread to other regions, affecting an estimated 10 million people, said Felicia Anthonio, who works with digital rights group Access Now on its #KeepItOn Campaign.

Atrocities in Ethiopia are taking place in the dark because no one can document them, Anthonio said.

Findings from a joint investigation by the United Nations and the state-appointed Ethiopian Human Rights Commission last month found serious abuses, torture, sexual violence and human rights violations committed by all sides, and called for citizens to be protected.

The digital rights campaigner added, "It is really making it increasingly hard, if not impossible, if I would say, for journalists and activists to corroborate accounts of these violations that are coming out of the affected regions in Ethiopia."