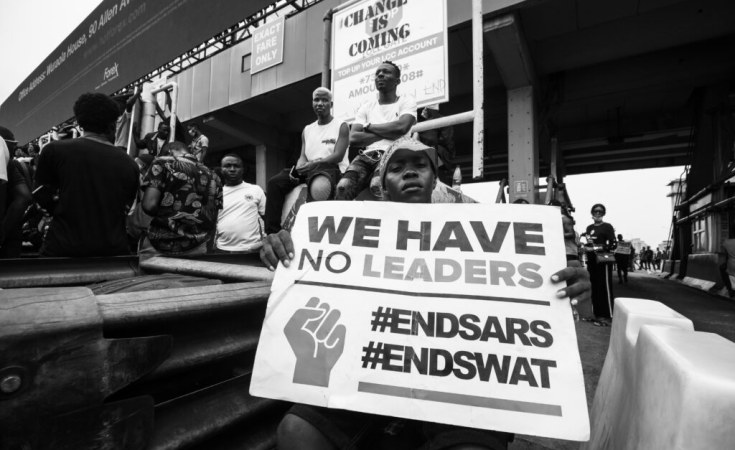 Nengi Nelson/Unsplash
Social media was instrumental to the organisation and spread of the #EndSARS protests in Nigeria in October 2020.
Amnesty International (London)

The Nigerian Authorities must drop all charges against Imoleayo Michael who is facing years in prison for joining protests against the Special Anti-Robbery Squad (SARS) last October, Amnesty International said today, ahead of his trial on Monday.

Michael, a computer programmer from Nigeria, joined demonstrations in October last year against the violence, extortion and killings by SARS. He promoted the protest on Facebook and Twitter using the viral hashtag #EndSARS.

Two weeks later, in the middle of the night, 20 armed men raided his home, smashed his window and pointed a gun at him. They locked his wife, elderly mother and seven-month-old son in a room and cut off the power supply to the streetlights surrounding his house. Michael was locked in an underground cell for 41 days where he was hand-cuffed, blindfolded and chained.

Michael was released on bail in December last year, but his trial resumes next week. He faces trumped-up charges of "conspiracy with others to disturb public peace' and "disturbing public peace".

As part of its Write for Rights campaign, Amnesty International is calling on the Nigerian authorities to immediately drop all charges against Imoleayo Michael.

"The DSS (Nigeria's Secret Police) took me in the presence of my seven-month-old baby, [detained me] for 41 days, cuffed and chained me like a criminal, took my job, withheld my work tools and messed my psych and health - all because I raised my voice for a better Nigeria.

"I'm not a criminal. I only protested for the betterment of my fatherland. As a programmer, I should be able to move around with my laptop without fear of being killed by SARS."

"Imolaeyo is being brutally targeted simply for joining marches demanding an end to the merciless rule of the Special Anti-Robbery Squad in Nigeria.

"Over a year since the protests took place, Imolaeyo is still suffering a long and drawn-out trial and faces three years in prison.

"The #EndSARS protests ended in a brutal crackdown by Nigerian security forces with protesters attacked, tortured and killed. To this day, there has been no justice for the victims of the atrocity. Despite promises by President Muhammadu Buhari of reform, it is clear that police impunity continues.

"The Nigerian authorities must drop all of the charges against Imolaeyo and end police violence in the country."

No justice for victims of #EndSARS protests

Amnesty documented the violence by Nigerian security forces at the Lekki toll gate in Lagos on 20 October 2020. In a recent review, Amnesty found that not a single person has been brought to justice for the torture, violence and killings of peaceful protesters, and documented continued violations being committed by the police.