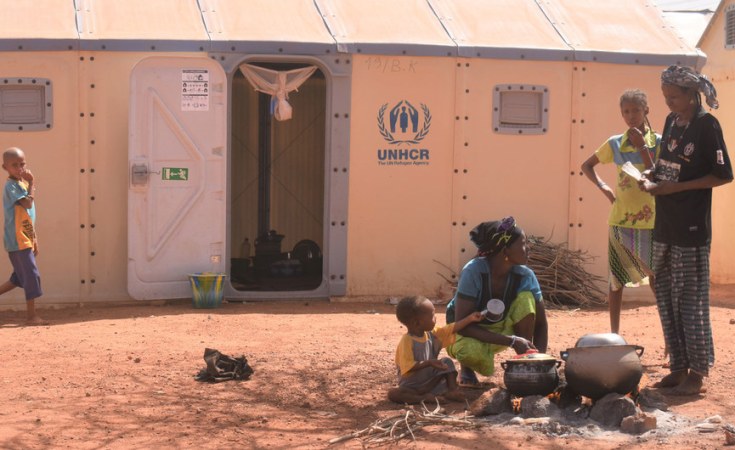 Ouagadougou — Worsening security in Burkina Faso is hitting the country's 1.3 million internally displaced people (IDPs), with many being forced to flee their places of refuge for a second time. One refugee camp was closed after it was visited by Hollywood actress Angelina Jolie. And rights groups say they are investigating reports terrorists infiltrated another camp to commit acts of sexual abuse.

As security in Burkina Faso has deteriorated in recent months, state control outside of major cities has diminished and terrorist attacks by groups linked to Islamic State, al-Qaida and local bandits are going up. Increasingly, people displaced by the conflict are falling victim to terrorists in areas they had once fled to for safety.

In June, Hollywood actress Angelina Jolie visited the Goudoubo refugee camp in Burkina Faso's war-torn Sahel province to mark World Refugee Day. During her speech at the camp, the special envoy for the U.N.'s refugee agency (UNHCR) said, "This is where the humanity and decency of the world is measured. Where human strength and resilience are most clearly and starkly seen. Not in the world's gleaming capitals, but in places like this."

Last month the Goudoubo refugee camp was closed. After incursions by terrorist groups at the camp, security forces were unable to guarantee safety. More than 11,000 refugees living there have since been relocated to the nearby town of Dori.

Aminata, who is one of those refugees and who works with the UNHCR to advocate on behalf of female refugees from Goudoubo, said, "Today, women come by and tell me that all their possessions remain in Goudoubo, because they did not have the strength to carry them. They only grabbed their children's hands to leave the camp." She said they have to buy water to survive and there are no places in the schools for their children.

Charles Zoueke, protection officer for the UNHCR in Burkina Faso, said the refugees, now in Dori, don't have enough resources. "We should help them to be integrated in Dori," he said. "To do that, it is important for us to arrange for them to access services."

In an attack last week in Foube, in the country's center north region, 10 civilians and nine soldiers were killed while IDPs were caught in crossfire and forced to flee to nearby Barsalogho.

Corinne Dufka, the West Africa Director of Human Rights Watch, reported an incident last week of several sexual assaults against female IDPs by terrorists at a site in Dablo, which is close to Barsalogho.

Security forces are believed to have left the site some days before the abuses took place.

The Ministry of Women, National Solidarity and Humanitarian Action did not respond to a request for an interview on recent incidents of IDPs falling victim to terror attacks.