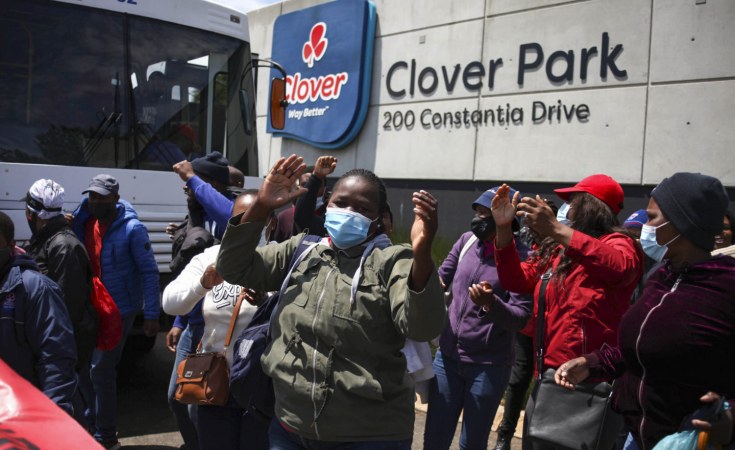 The strike at the dairy company continues with no end in sight and seems likely to escalate amid warnings to occupy its factories if it enters a third week.

A large contingent of private security guards were deployed to the entrance of dairy giant Clover's head office in Constantia Kloof, Roodepoort, on Thursday 2 December. Dressed in riot gear, the armed guards positioned themselves to stop any protesting employees who were recently retrenched. Two black armoured vehicles were parked close to each other, one at the entrance and the other a metre away overlooking the premises. Everyone waited.

"The guns are for protection in case things go wrong, but we don't intend to use them," said a man in charge of security not wearing a uniform and holding a rifle.

It was after 10am and only two striking employees dressed in red T-shirts had arrived and were standing at a distance. They seemed intimidated by the heavily armed security, but their fears evaporated as soon as buses arrived with men and women singing struggle songs.

Members of the Food and Allied Workers Union (Fawu) and the General Industries Workers Union of South Africa (Giwusa) came to protest against austerity measures that threaten their jobs and livelihoods.

The indefinite strike at Clover, which is majority owned by Israel's Central Bottling Company through Milco SA, began on 22 November. Two days later, chief executive Johann Vorster said only non-striking workers would get a 13th cheque this year.

The workers took charge of traffic and directed alarmed motorists in Constantia Drive who were afraid to drive past the group. The protesting workers sang until some curious Clover employees stepped outside their offices to see what was happening.

Most of the protesters did not want to give their names, but they were willing to share their thoughts and circumstances. One of them is a young mother of two who works in the sales department. Her worried expression was testimony to how devastating proposed salary cuts for Clover's workers would be.

"Life is very tough. I won't be able to afford to even go to work. I'm a single parent and how am I supposed to support my kids? They go to school and how am I even going to afford to buy food?" she said angrily. "If we accept the 20% salary cut, please tell me, how much are we going to be left with after monthly deductions from our pay? Nothing!"

A woman standing next to her joined the conversation. "They say we are expensive because we have been working for Clover for a long time," she said, adding that she is a single parent of three children and has been with the company for more than 12 years.

"When I started I was earning R2 000 and through negotiations the money has gradually gone up. Now they want to take it away after such hard work. That will never happen."

Some striking workers with long service records in the company seem not to mind the salary cut, but they insist that they should be paid first for the years they have worked before deciding whether to return to work or resign. They feel that their dedication to the company has been neglected.

They are especially angered by the treatment the company meted out to those who were handed retrenchment letters in November without any prior consultation.

"They were supposed to have spoken to us first about their situation, but they treated us like we are animals. They just gave us the letters. Just like that, take it or leave it. We also say to Clover, take it or leave with our labour," said one protester.

Giwusa president Mametlwe Sebei was first to address the crowd at the office's entrance. He sent a stern warning to Clover that the protesters would occupy all its factories next week if their demands are not met.

"Either Clover management take all our workers back, or they should pack their bags and fuck off," he told the cheering crowd. He also reassured the workers that there will be no salary cuts and they will get the bonuses that Clover had threatened to withhold from those on strike.

Sacha Knox, representing the Workers and Socialist Party, says the issue is not only about Clover's workers but a wider political one. "What we are seeing is that the jobs are being cut in South Africa and exported to Israel companies, which operate on land that is illegally occupied. They are brutalising the Palestinean people and now they are exporting the brutalisation of the workers to South Africa."