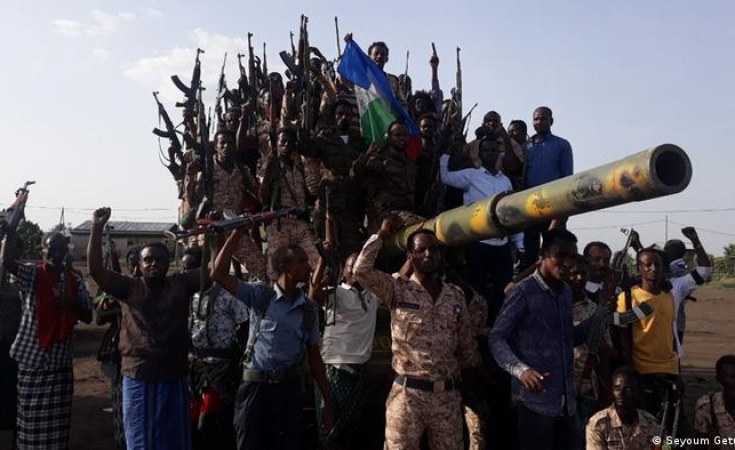 Seyoum Getu / Deutsche Welle
Dozen of armed people on a tank in an unidentified area of Ethiopia.
The East African (Nairobi)
analysis By Aggrey Mutambo

The desire by the Ethiopian government to seal off external access routes for the Tigray People's Liberation Front (TPLF) has attracted Middle East rivals to the Tigray war, adding outside influence to the year-long conflict.

This week, the TPLF, once a ruling party in Ethiopia but now considered a terrorist group in Addis Ababa, wrote an open letter to the UN Secretary General Antonio Guterres, accusing three Middle Eastern powers of supplying arms to the Ethiopian government.

Debretsion Gebremichael, the TPLF leader, said UAE, Iran and Turkey were party to the conflict by arming Addis with weapons and drones.

He demanded that the three be advised to "cease supplying weapons to the federal government of Ethiopia" because "these weapons are used to attack civilians and civilian targets in total violation of international humanitarian law and their use is escalating war and further destabilising Ethiopia."

The accusation was the first direct finger pointed at an external entity contributing to the war. The trio denies fuelling the war, although Turkey has in the recent past offered to mediate in the conflict, even though it also reached various bilateral agreements with Ethiopia on defence and security cooperation.

The three countries, plus other Middle East countries have in the past been biggest donors to humanitarian aid to conflict regions in the Horn of Africa including Sudan. For the TPLF, supply of arms constitutes fuelling the war, regardless of whether the supply has been under formal arrangements.

"Their readiness to provide arms to belligerents and to intervene in a partisan manner to internal political issues including armed conflicts has proven profoundly destablising."

There has been no independent confirmation of drone usage, although various reports have indicated Ethiopia has shelled parts of western Tigray and the capital Makelle as well as other nearby territories initially held by TPLF in Amhara and Afar regions. Addis Ababa, on its part, accuses TPLF of receiving foreign support although it hasn't mentioned the foreign entities involved.

A diplomat in Addis Ababa told The EastAfrican the rivals are feeding into Prime Minister Abiy Ahmed's desire to lock off any possible external routes that could offer supplies to the TPLF, either through Djibouti or Sudan.

"That is why there is intense fighting in Western Tigray (which borders Sudan). The government feels it will have strategic advantage if it takes control of these regions. The route to Djibouti is also crucial," he said. He did not suggest Sudan nor Djibouti were ready to help TPLF, but said porous borders could make it easier for the rebels to restock if they controlled the regions.

This week, Ethiopia's Prime Minister declared a series of victories against the TPLF, a week after he personally joined the frontline. Abiy asked those still fighting to surrender and help end the war.

The unity of Middle East countries -- traditionally rivals themselves -- in buttressing Ethiopia's fight against TPLF is seen as a convergence of interests, not renewed friendship between them.

Hawa Noor Zitzmann, Affiliated Fellow at the Institute of Intercultural and International Studies, University of Bremen told The EastAfrican the Tigray conflict was not yet a proxy war, because it has many internal factors fuelling it.

"However, the involvement of external actors like in many other cases makes it more complicated and even more difficult to resolve," she said. "It is nothing new. In Sudan, there were also foreign interests there, the same with Somalia and many other conflicts in the region, so I wouldn't say it is something unique to Ethiopia. You cannot really draw a line between alliances and enemies, because one party can support a faction here and there next day they are supporting another, or two enemies supporting one faction."

This lack of linear relations between the supporting Middle East cast has been seen before in the region, including Somalia and Sudan. A report, Africa-Middle East Relations, published last month by the Horn International Institute for Strategic Studies indicated that the UAE, Turkey, Iran, Qatar and Saudi Arabia have been active in the Horn mostly to drive their economic interests as well as political and ideological interests including survival, foreign influence, freedom of navigation in the Horn seas and commercial interests.

And although most of the Horn countries have benefited from economic boosts, the impact of Middle East engagements in the Horn has been continual instability due to "asymmetrical power relationships" with Africa.

"Just like in the Somalia conflict, the Ethiopian one has, once again, become a theatre of intense competition for influence by the Middle Eastern powers in which the Saudi Arabia-UAE-Egypt and the Turkey-Qatar-Iran axes are projecting power and influence," said Dr Mustafa Ali, Chairman of the Horn International Institute for Strategic Studies.

"The only difference in the Ethiopian conflict, (unlike in Somalia) is that competitors in the Middle East (Iran and Turkey on the one side, and UAE on the other) are all supporting the Ethiopian government with resources, including weapons and expertise. In their calculations, they wish to have a foothold in Ethiopia, which they all consider very important for their strategies in the Horn and the larger African continent," he suggested.

Those interests though vary, he said, with Turkey and Iran engaging Ethiopia largely because of its strategic location and importance.

"Less complicated is the UAE, whose interests are largely diplomatic and commercial, and therefore wishes to protect them in the region.

"And whenever you see Turkey, behind it will closely follow Qatar's financing, and Iranian manipulation. These three work closely together."

Egypt, which has an ongoing dispute with Ethiopia over the Nile waters was initially thought to use the situation to its advantage. However, public overtures by Cairo have showed it is cautious not to play sides in a conflict whose ending may be more complicated. Egypt has stayed away from opening getting involved and the diplomat in Addis Ababa told The EastAfrican all Ethiopians are at least united on protecting the Grand Renaissance Dam from any form of external opposition. "There is no difference in policy on GERD, between Ethiopia under Abiy and Ethiopia under TPLF, they all vow to defend it," he explained.

Nonetheless, the high stakes battle to control one of the most strategically important countries in the region means that some external actors have decided that their interests are best served by backing Abiy, according to Murithi Mutiga, the Horn of Africa Project Director for the International Crisis Group.

"There are many external actors that have little appetite to see a change of government by force," he told The EastAfrican.

"Clearly, a number of actors have made a bet on Premier Abiy emerging victorious and have opted to support him militarily.

Turkey's alleged involvement and its pledge to mediate in the conflict, however, now means it has become an interested party that may appear biased in the eyes of the TPLF.

"Logically, no one is able to effectively -- and "effective" is the keyword here -- intervene or mediate between warring sides one of which they support with the weapons of the same war," argued Adam Aw Hirsi, a Horn of Africa political analyst from Somalia.

"This logic applies to all the super and middle powers supporting or are implicated in taking sides in the raging Ethiopian civil war. And it seems at this juncture there are too many."

The conflict which began on November 4 last year has persisted in spite of calls by regional and world leaders for dialogue. African Union's High Representative for the Horn of Africa, Olusegun Obasanjo, has been trying to mediate between the sides without success. Both sides have said they will consider dialogue through the AU mechanism, but neither side wants to come to a table where the other is sitting.

"We continue to speak and engage the parties but unfortunately the hostilities continue," AU Chairperson Moussa Faki Mahamat told an audience in New York during a forum of AU and the UN on Wednesday.

"An immediate ceasefire and political dialogue is the only way to resolve this conflict. President Obasanjo is and will continue his mediation efforts with parties to the conflict in Ethiopia."