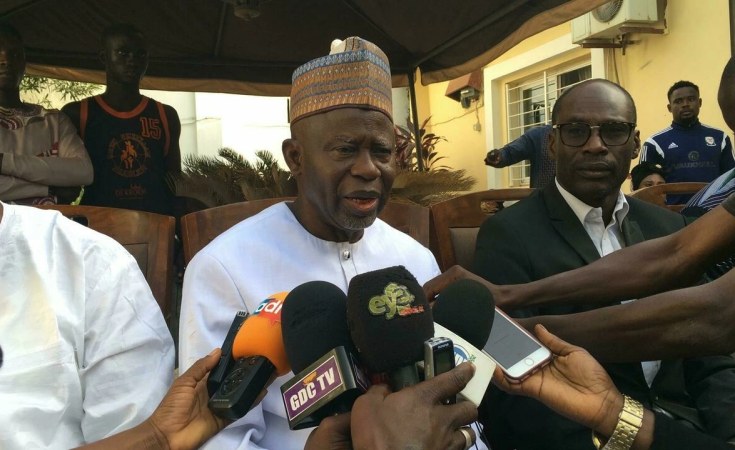 "We reserve the right to embark on any lawful course of action the situation requires. To this end all options are on the table," he read.

Darboe read the statement from his compound in the Pipeline neighborhood of Karaba Avenue, which was agreed upon by independent candidate Essa Faal and Gambia Democratic Congress candidate Mama Kandeh, who were present.

They cited an inordinate delay in transmitting the result, that political party agents at polling centers and the Independent Electoral Commission had issue with some of the counts and refused to endorse the results.

"In the meantime, we urge all Gambians to reamin calm and peaceful while we continue our investigations of these concerns," he concluded.

Outside the compound, UDP supporters gathered, at one point chanting 'Sachembo', meaning 'thieves' in Wollof.

As of 6pm on Sunday, the final three constituencies had not been announced.

By 2pm on Sunday, the IEC had announced 41 of the 53 constituencies and Darboe had only won five.

He had been arrested in 2016 for protesting against activist Solo Sendeng's death in detention, and was in jail, unable to run.

Gambia has a first past the post system for determining the winner.

The other candidates trailed way behind the two powerhouses.

Many people waited at home to hear the result, and there was little traffic on the street, unlike a typical Sunday, when families go to the beach.

Although many polling stations had finished their count and some had even submitted the vote numbers before 6pm, the IEC did not begin to publish or announce official results before 11pm.

IEC Chairman Alieu Momarr Njai announced on state television early Saturday morning that Barrow was in the lead with 14,599 votes to Darboe's 6,188 votes.

Gambians come out en masse to vote for their new president

Down to the wire: Who will be Gambia's future president?

Gambians came out early on Saturday to vote for their future president, as many streets and main arteries in the Greater Banjul area were uncharacteristically traffic-free, as people picked their president, then went home to wait for the results.

Many polling stations closed on time at 5pm, but others, where voters came to vote before the closing time, waiting in lines to cast their marble.

Voters in the West African country vote in a unique way with a crystal marble that they deposit into the vote drum of the candidate of their choice. This is efficient for vote counting and makes it easier for the illiterate to vote.

Both Darboe and MP Halifa Sallah (PDOIS) have said this is their last campaign and won't run for the top job again.