Kenya: Enziu - the River of Death in Kitui 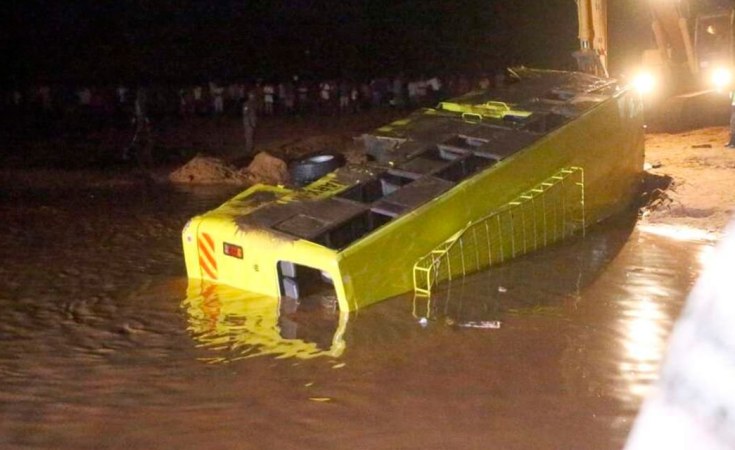 Sila Kiplagat / Nation Media Group
The wreckage of the bus that plunged into River Enziu in Mwingi, Kitui County in a picture taken on December 5, 2021.
The Nation (Nairobi)
By Kitavi Mutua & Pius Maundu

The Enziu River crossing in Mwingi East has been a death trap for years. Hardly a year passes without people drowning in the seasonal river that flows from Mumoni Hills, cutting across Mwingi North and Mwingi Central constituencies, before joining River Tana.

Last year, five people ferrying charcoal perished after their truck was swept away at the same spot where 23 choir members died on Saturday.

Three years ago, four bodies of people who drowned at the same spot were recovered after three weeks of frantic search by rescue teams drawn from the county government of Kitui, Kenya Red Cross, National Youth Service and the Disaster Management Unit.

Mangled wreck of the Toyota Probox they were travelling in was found buried 10 metres underneath the river bed-- about 100 metres from the river's killer bridge after days of excavating the river bed.

In 2019, a secondary school principal and his driver escaped death by a whisker after a Land Rover ferrying exam papers was overpowered by the swollen river.

The test papers, which were swept away by the raging waters, were later retrieved by Good Samaritans.

And the river keeps swallowing people for a reason.

An overhead bridge project that was supposed to ease transport in the region was abandoned midway in 2018.

Damages on the surface bridge have left a death trap that residents have to deal with every rainy season.

The overhead bridge project was initiated by former Mwingi Central MP Joe Mutambu but was abandoned midway soon after he lost elections to Gideon Mulyungi.

It is one of the many white elephant projects that dot the country due to lack of continuity after change of office bearers at both county and national levels.

Every year, a delegation of top government engineers visits the Enziu bridge with promises to have it completed to ease transport along the Nuu-Nguni route in Mwingi.

Prof Maringa said that as a short-term measure, the government would first improve the drift which was almost swept by water last year and which caused Saturday's bus tragedy.

"A drift will first be constructed for residents to use as the government continues with the tendering process for the main bridge which stretches up to 100 metres," Prof Maringa said.

Kitui Governor Charity Ngilu and Bishop Joseph Mwongela of Kitui Catholic Diocese on Sunday demanded a permanent solution to the perennial drowning at the bridge.

Mrs Ngilu said she would personally follow up with national government to ensure that the bridge is done afresh and to the required standards.

"I understand there's fresh tendering but we hope the contract will not be given to another shoddy contractor," Mrs Ngilu said, adding no more lives should be lost at the bridge again.

The bridge is part of the 35-kilometre Nuu-Nguni Road project whose tarmacking was launched by President Uhuru Kenyatta in June 2017, but five years down the line, the bridge remains a killer spot.

The contractor - Admo Construction Ltd-- complained that despite raising several payment certificates, the government had declined to pay them.

Admo Managing Director Mohamed Adan told the Nation in May this year that out of Sh1.4 billion contract sum, he had received a paltry Sh304 million from the government despite raising milestone certificates amounting Sh561 million.

"I need the intervention of the government to release the remaining funds of the raised certificates to enable me complete this project," said Adan.

KeRRA Kitui Region Manager Mbavu Sayo confirmed during the County Development Implementation Coordination Committee (CDICC) tour of the project that the road is at 68.5 per cent complete.