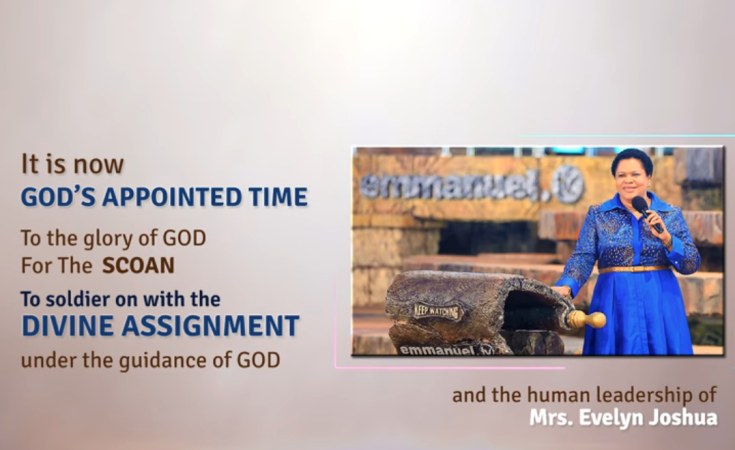 Six months after the death of Prophet TB Joshua, in-person service kicked off at his Synagogue Church of All Nations (SCOAN) on Sunday with his widow, Prophetess Evelyn TB Joshua, presiding.

Besides the death of the founder, the Covid-19 pandemic had seen the church close for almost 21 months. However, activities peaked on December 5, 2021 as the new leadership, led by Evelyn, took over formally.

Worshippers trooped in for services at the headquarters of the church in the Ikotun neighborhood of Lagos, Nigeria, with estimate statistics putting the number of worshippers occupying the sprawling auditorium at 11,000.

TB Joshua died on June 5, 2021 and his wife succeeded him amid grumbling from a faction of the church leadership.

Evelyn, 53, in her maiden address at the church, called on the members' support and prayers to continue from where her husband left, saying the journey had not been easy since his demise.

"These past months have surely been challenging but we thank you all for being strong and for keeping the faith as we have been trained...trials are the soil upon which faith flourishes. We have now commenced the journey from where our father left. He had already prepared us all for this new phase and we must rise up to the occasion as a team under the command of God and the direction of the Holy Spirit," she said.

The death of TB Joshua caused a stir among SCOAN leaders with one elder, Mr Kayode Emmanuel, issuing a statement on June 17, 2021 denouncing some of the church leaders' plans to disinherit his widow and their three children - Sarah, Promise and Heart.

"Disenchanted church members see their action as spiritual coup d'état or a kind opportunistic spiritual gangsterism that is antithetical and inimical in the sanctuary. Right from the moment of TB Joshua's departure, they translated themselves into extraordinary uncontrollable authority and power with enormous and reckless freedom," Mr Kayode said in his statement.