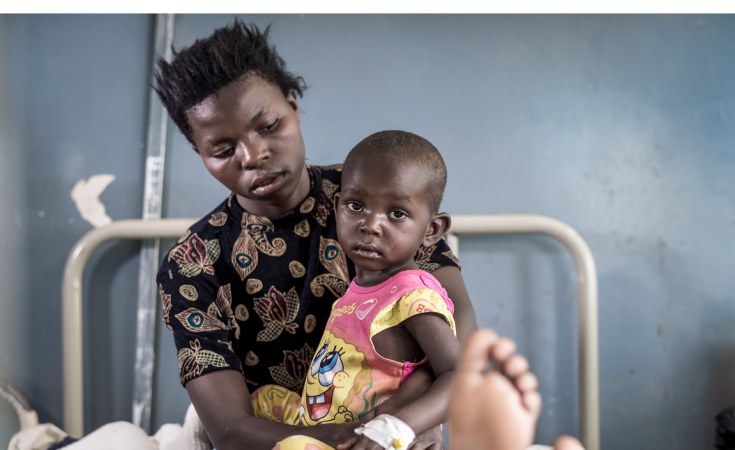 S. Torfinn / WHO
Mother and child getting treatment for malaria in a health care facility in Kisumu, Kenya (file photo).
UN News Service

Disruptions due to the Covid-19 pandemic resulted in considerable increases in malaria cases and deaths between 2019 and 2020, the World Health Organization (WHO) said on Monday.

However, "the doomsday scenario" projected by the WHO has not materialised," Dr Pedro Alonso, Director, WHO Global Malaria Programme said at the launch of the UN agency's annual World Malaria Report in Geneva.

According to the analysis, moderate disruptions in the delivery of malaria services contributed to 14 million malaria cases and 69,000 deaths.

Two thirds (or 47,000) of the additional malaria deaths, were due to disruptions in the provision of malaria prevention, diagnosis and treatment during the pandemic.

Early in the pandemic, WHO had projected a doubling of malaria deaths in sub-Saharan Africa, as a worst-case scenario. Yet, the analysis found there was an estimated 12 per cent increase in deaths in the region between 2019 and 2020.

"The first message is a good news message. Thanks to urgent and strenuous efforts we can claim that the world has succeeded in averting the worst-case scenario of malaria deaths," Dr Alonso said.

The report found that just 58 per cent of countries completed their planned campaigns to distribute insecticide-treated mosquito nets (ITNs) in 2020, with most experiencing important delays.

Globally, 72 per cent of all ITNs planned for distribution had been distributed by the end of 2020.

In 2020 of the 65 countries who responded, 37 countries reported partial disruptions (5 per cent to 50 per cent) to malaria diagnosis and treatment services.

This year's World malaria report used new methodology to estimate malaria deaths worldwide. This resulted in a larger share (7.8 per cent) of deaths among under-five children than previously recognized (4.8 per cent).

"We have a better estimate of the real malaria burden and this is now at 627 thousand deaths in 2020" Dr Alonso said.

The report found that there was a 27 per cent reduction in case incidence (cases per 1000 population) of malaria from 2000 to 2020 with an overall downward trend in the malaria death rate from 2000 to the present day.

The report revealed that globally, 1.7 billion cases and 10.6 million deaths were averted between 2000 and 2020. Most of the malaria cases (82 per cent) and deaths (95 per cent) averted over the last 20 years were in the WHO African Region.

However, even before the emergence of COVID-19, global gains against malaria were levelling off." "We are not on a trajectory to success, we are increasingly moving away from reaching the 2020 milestones of WHO's global malaria strategy," Dr Alonso said.

A new, country-driven approach to malaria control in high-burden countries was beginning to gain momentum when COVID-19 struck.

On a global scale, progress against malaria remains uneven. The report found that many countries with a low burden of the disease are moving steadily towards the goal of malaria elimination.

Two countries - El Salvador and China - were certified malaria-free by WHO in 2021. However, most countries with a high burden of the disease have suffered setbacks and are losing ground.

Global progress against malaria over the past two decades was achieved, in large part, through the massive scale-up and use of WHO-recommended malaria tools that prevent, detect and treat the disease.

However, the most recent data also demonstrate that significant and sometimes widening gaps in access to life-saving tools for people at risk of malaria.

The report warns that the situation remains precarious, especially in sub-Saharan Africa. A convergence of threats in the region poses an added challenge to disease control efforts.

These include Ebola outbreaks in DRC and Guinea, armed conflicts and flooding. At the same time, the document reiterates that the pandemic is not over, and the pace of economic recovery is uncertain. Without immediate and accelerated action, key 2030 targets of the WHO Global technical strategy for malaria will be missed, and additional ground may be lost.

The strategy's goals include a 90 per cent reduction in global malaria incidence and mortality rates by 2030. The report reiterated that this will require new approaches and intensified efforts aided by new tools and better implementation of existing ones.

This includes a stronger emphasis on equitable and resilient health systems and data-driven strategies.

The report also recommended the expanded use of the RTS,S malaria vaccine recommended by WHO in October. "the vaccine is feasible to deliver, is safe, has a public health impact and is cost-effective," Dr Alonso said.

"As we speak GAVI is discussing opening up a window for investment in this malaria vaccine," he added.

The analysis also emphasized that stepped-up investment is also essential. "Funding has flatlined" Dr. Alonso warned "We are about 50 per cent off what we believed the target should be for 2020".

The report found that a total of $3.3 billion was invested globally in malaria control and elimination in 2020. This was against a target of $6.8 billion to reach global malaria targets.

Annual investments will need to more than triple by 2030 - to $10.3 billion per year, the report noted.