Gambia: The Gambia's 55-Year-Old Marbles Voting System Is Simple but Difficult to Cheat 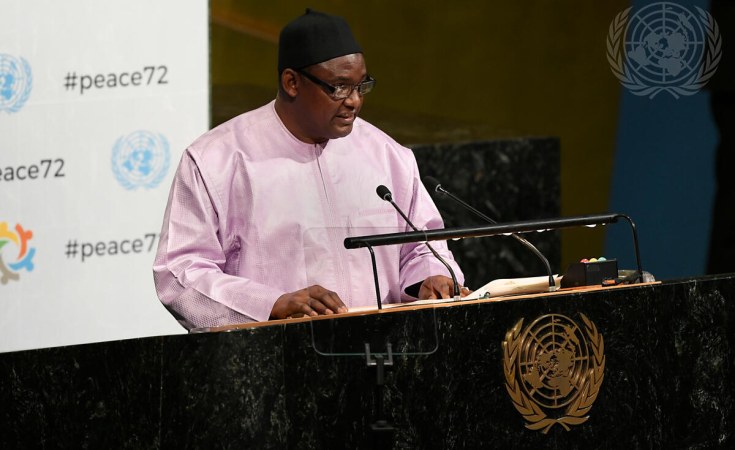 The Gambia's President Adama Barrow has been declared winner of the election held on 4 December. Barrow received around 53% of the vote cast while his closest rival at the polls, Oussainou Darboe, got 28%.

The election - the first since Barrow defeated Yahya Jammeh in 2016 - is largely seen as a test for democracy in The Gambia. Jammeh was forced into exile following refusal to accept his loss at the poll. His 22-year rule had been marred by human rights violations and repression of opposition voices.

The ousting of Jammeh opened the political space in the country, allowing mass participation. Citizens had the freedom to affiliate with any political party of their choice without fear of being arrested, detained, and tortured.

As results of the 2021 election came in, representatives from all opposition parties signed off on nearly all the tally sheets read to the independent electoral commission.

However, Darboe and two other candidates, Mama Kandeh and Essa Mbye Faal, said they would not accept the results because counting took longer than expected and because of unspecified problems at some polling stations.

Members of the electoral commission later confirmed that delay in the announcement of the results was made out of precautionary measures to ensure that the votes are fully vetted before being announced.

Barrow's victory was resounding mainly due to his messages of reconciliation and promoting unity across ethnic and tribal affiliations in the country.

For Darboe, Kandeh and Faal, challenging the results may be a political tactic to energise their supporters. There are no expectations that any error could emerge substantial enough to produce a different outcome.

The Gambia's democracy has so far endured.

The country has a unique system of voting that does not involve the use of paper ballots in casting votes. Instead, it uses marbles.

The opposition candidates who rejected the results have not indicated any problem with the voting process, especially as it relates to the use of marbles.

This form of voting has proven to be simple and difficult to cheat.

Voting with marbles was introduced in The Gambia by the British in 1965 when the country first obtained its independence because of the low literacy levels in the population at the time. The system has continued to be in use.

In the place of ballot boxes, there is a metal cylinder with a hole in the top. The containers are arranged on a table inside a voting booth and painted with the party colours of candidates as well as their photos for ease of identification. Each voter drops a marble into the container representing the chosen candidate.

The final tool used in this unique form of voting is the counting box. Marbles are emptied into a square tray that is dotted with holes. At the end of the voting, counting is done on the spot.

The holes in the trays get evenly filled with marbles. The total is then tallied and recorded on the spot for representatives of candidates and voters.

Counting on the spot ensures fairness and builds public confidence in the electoral process.

The candidates who have questioned the results have pointed to procedural issues in the delayed counting by the independent electoral commission. No evidence of fraud has been presented to prove that the results were rigged in favour of the incumbent.

As a standard rule of election and for ease of identification, the country is divided into zones referred to as constituencies and in each constituency, there are several polling stations where voting takes place. Every polling station is headed by a presiding officer representing the Independent Electoral Commission.

Voters are only allowed to cast their ballots at locations where they have registered to vote. On the election day, the presiding officers have a list to crosscheck the identities of the voters at that location. Voters' fingers are marked with liquid ink before they get a marble. These measures are taken to prevent individuals from voting twice.

The 4 December presidential election was more of a competition between Barrow, the incumbent and candidate of the National People's Party, and his former vice-president Darboe of the United Democratic Party.

The electoral system in The Gambia is based on first past the post. There is no runoff and any party that manages to record the highest number of total votes cast, however small the margin, is declared winner.

Barrow and Darboe's political "bromance" came to a grinding halt when Darboe began to express a presidential ambition. Darboe, who is one of the founding members of the United Democratic Party, has repeatedly run for office in the past and lost to Jammeh.

Beyond these two individuals, a number of issues were of significance to voters on 4 December.

They include the economy, security, corruption and falling standards of healthcare delivery.

While some of these issues were an assessment of the incumbents' four years of leadership, there is also a concerning increase in ethnic and tribal politics never seen before in the country.

Election as a statement

Although the use of marbles in elections may be considered an obsolete form of voting, it is a process that has so far been transparent and discouraged rigging.

Despite its simplicity, this form of voting has successfully ended a dictatorship in The Gambia. That is clear evidence that the voting system is working. Jammeh may have ruled with fear and intimidation but also respected the voting process which ultimately led to his ouster.

There is talk of introducing paper ballots in conformity with modern standards of voting. But why change to something much more complex when what is already in place is producing the desired outcome of a free and fair election?