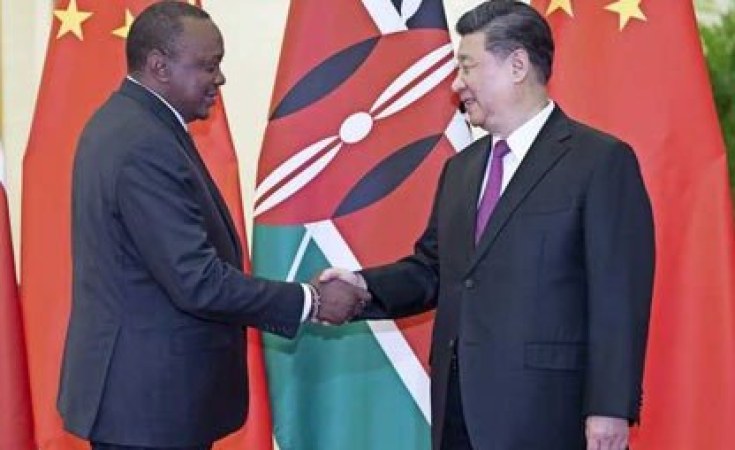 The Presidency/Daily Nation
President Uhuru Kenyatta (left) greets Chinese President Xi Jinping at the Great Hall of the People in Beijing on April 25, 2019 ahead of the second Belt and Road Forum for International Cooperation.
Voice of America (Washington, DC)
By Kang-Chun Cheng

Nairobi — Tyson Nuthu works in the outdoors industry in Nairobi and sees the presence of China everywhere.

"Just look at all the construction projects, from Ngong Road to the western bypass. Everywhere you look, China is active here in Kenya," he said.

Kenya is along the path of Beijing's Belt and Road Initiative, which is financing infrastructure projects and developing trade routes linking China to the world.

Africa is increasingly being seen as a technology hub that is getting the attention of the world's superpowers, including China and the United States.

U.S. Secretary of State Antony Blinken made his inaugural visit to the African continent in mid-November. He started his tour in Nairobi, the capital of Kenya, an American ally deeply indebted to China. His four-day tour also included visits to Senegal and Nigeria.

A study by the Brookings Institution, a nonprofit public policy organization based in Washington, described the trade relationship between the U.S. and sub-Saharan Africa as "underdeveloped," despite the U.S. prioritization of sub-Saharan African exports under the Generalized System of Preferences.

The first Forum on China-Africa Cooperation (FOCAC), which was held in Beijing in November of 2006, welcomed the adoption of a declaration and action plan for a "new type of strategic partnership." Since then, Chinese foreign direct investment (FDI) flow to Africa grew significantly, exceeding that of the United States since 2013.

But how do those on the African continent view this inflow of Chinese investment?

In an interview with VOA, John Calabrese, the director of American University's Middle East-Asia Project, said discernment between government and society is critical.

"African perceptions of Chinese investment vary greatly," he said. Chinese companies have imported laborers and inundated markets with cheap items, which has "bred some resentment at the societal level," especially among small and local African businesses.

"Wide reporting -- and to some extent, the exaggeration of cases -- of Chinese 'debt trap diplomacy' have created something of a backlash," Calabrese said in an email. "To repair the reputational damage as well as to protect and further advance its economic penetration on the continent, Beijing has attempted to 'revise' its lending practices."

African views of US presence

Josh Maiyo, a lecturer at United States International University specializing in China-Africa political ecology, said in the aftermath of the war on terror, the U.S. has given up on the democratization process. Its primary focus now is on the security of the African continent.

"The rest of Africa has essentially been forgotten," Maiyo said in a phone interview with VOA. "From the African perspective, the U.S. has been countering Chinese advancement more than anything else. It's only been token engagements with no concrete programs to offer or coordinated, structural approaches."

Sincerity is paramount for the U.S. to have successful relations with African nations, said Gustavo de Carvalho, a senior researcher at the South Africa-based Institute for Security Studies. When interviewed last month by the United States Institute of Peace, Carvalho said the African continent as a whole has too much experience with "the conditionality of engagements that reduce African voices to mere aid recipients rather than equal counterparts."

"The U.S. should ... equally engage on how its approaches are conducted and perceived by local and national actors," Carvalho said. "Africans see very clearly that the United States is inconsistent in promoting transparency and anti-corruption policies -- a principle it dilutes in its relationship with Saudi Arabia, for example. This can leave Africans feeling that the U.S. is condescending in its relations to them."

"U.S. attention to Africa has waxed and waned over the years," American University's Calabrese noted.

Although commitments to global health threats such as HIV/AIDS, malaria and ebola have been instrumental, Calabrese's concern about continuity persists.

"U.S.-Africa policy might amount to a collection of ad-hoc initiatives and not a coherent strategy," he said.

"As the United States and our partners further develop and implement the Build Back Better World initiative, we recognize that robust, meaningful partnerships will be critical to ensure that Build Back Better World delivers infrastructure that meets the needs of middle and lower-income countries," a senior White House official said in a written statement to VOA.

In a November 19 speech in Nigeria, Blinken said his trip reflected "the breadth and depth of our partnerships in Africa - how we're working together to find innovative solutions to new challenges, and how we're investing in long-term sources of strength, rather than short-term fixes."

In response to VOA's inquiry, the U.S. State Department referred to Blinken's November 21 interview with the BBC, where he said, "our Africa policy is about Africa, not about China...it's premised on this basic reality Everything that we seek to do in the world to make progress for our own people cannot be done without Africa."

"We're delighted to have the U.S. back supporting the multilateral system," said Geoffrey Onyeama, Nigeria's foreign minister, in a press conference with Blinken.

Perception on the ground

The perception and popularity of the U.S. in Africa has been lukewarm by some, Maiyo said. "Traditionally, when the American secretary of state visited Africa, there was a lot of anticipation. This time it barely caused a stir."

In contrast, analysts and people on the ground are much more aware of China's presence as an investor in Africa.

"[China] has a shock effect that creates a sense of awareness," Maiyo said. "In terms of project scale, U.S. investment in infrastructure is not nearly as visible."