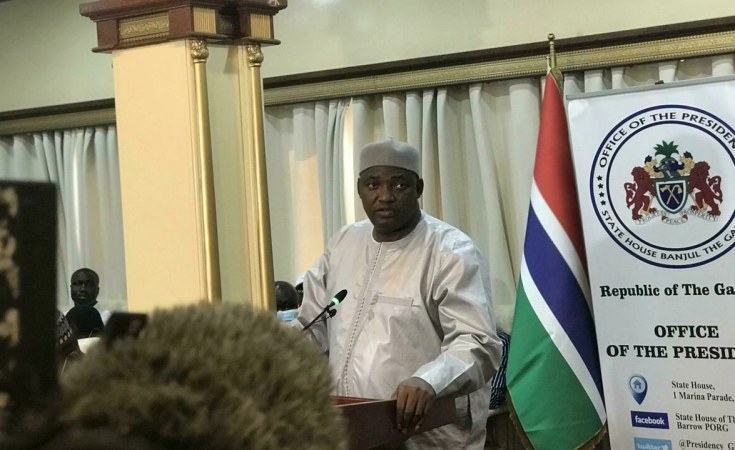 In his first media engagement following his re-election on Sunday, President Barrow said he would ensure the draft constitution was sent back to parliament.

In September 2020, Gambia's parliament voted against the draft constitution that was supposed to replace the 1997 constitution, a document that enhanced Jammeh's 22 years of authoritarian rule.

This move ignited fear amongst Gambians that the current president will use the 1997 constitution to extend his tenure past term limits.

Incumbent Barrow won a by landslide with 53.2% of the total votes while close contender Ousainou Darboe of the United Democratic Party (UDP) finished in second place with 27.7%.

Although Darboe and two other opposition leaders, independent Essa Faal and Mama Kandeh of the Gambia Democratic Congress (GDC) party rejected the results, even before the country's electoral commission announced the winner, the tripartite alliance fell apart less than 24 hours later.

Gambians come out en masse to vote for their new president

"In the interest of fostering national unity, peace, stability and security of the country, 'Team Sobeyaa' (referring to Faal's team) plans to concentrate on building our brand with the view of winning future elections," said Faal in a press release on Monday.

The party has not filed a petition in court nor has it commenced the process, UDP spokesman Almamy Taal told local media.

Presidential candidates have 10 days to file a petition to challenge the result.

The UDP since 1996 challenged every election outcome except for 2016, when Barrow, then of the UDP party, beat Jammeh in the election.

United Democratic Party (UDP) supporters who were protesting against the election results on the street near the home of the party leader Darboe clashed with the police on Monday night.

"I saw three pickups filled with police officers, then the deputy police inspector came to the residence of the party leader. Five minutes later, the first tear gas canister was thrown at us," UDP supporter Sumaila Fadera told RFI.

He denied allegations that the party supporters were protesting on the streets.

"Everyone is aware that we usually converge at the party leader's home regardless of the period," said Fadera.

"We were only there because it was where we could feel comforted" after the election, he added.

Some 12 people were reportedly hospitalised after the tear-gassing, along with eight journalists. All were later discharged.

A local photographer was allegedly assaulted by UDP supporters at the scene, who claimed he is a NPP rival party sympathiser.

"When the police threw the first tear gas we all ran to the UDP party leader's home and I tried to take photos of the scene," said Dumbuya.

"Then someone from the party recognized me from the 2016 party coalition and told others I am state photographer. They all rushed to me to grab my neck and beat me up."

He said that three of his cameras were seized, and two were later broken by the crowd.

President of the Gambia Press Union Muhammed MS Bah condemned this act and said they are looking into the incidents.

Meanwhile, the National Human Rights Commission also condemned the use of tear gas by the police and urged UDP leader Darboe to encourage his supporters to be law abiding.