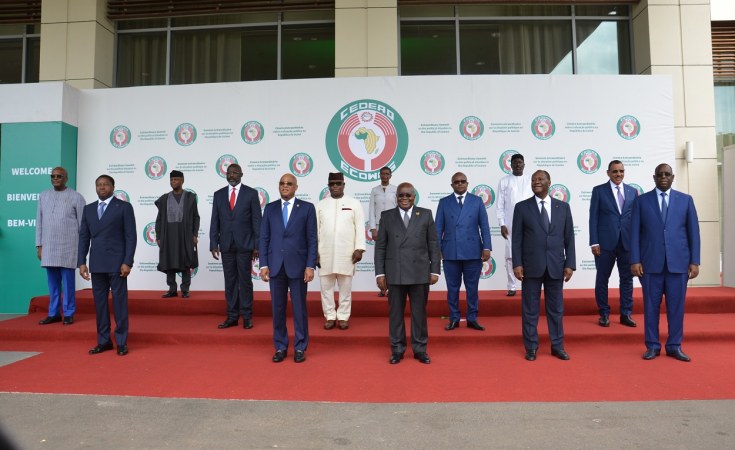 West African leaders have demanded that the junta in Mali sticks to its plans for February polls, threatening further sanctions if Bamako fails to commit to returning to democracy.

"The heads of state... decided to keep the (deadline) of February 27, 2022 for elections in Mali," president of the Economic Community of West African States (ECOWAS) bloc Jean-Claude Brou told reporters in Abuja on Sunday, adding sanctions would be imposed in January if Mali did not move to stage polls.

Brou did not specify what new measures ECOWAS might take.

The head of Mali's government had earlier on Sunday promised he would provide the bloc with an election timetable by the end of January 2022.

The mediator for ECOWAS, former Nigerian president Goodluck Jonathan, will travel to Mali in the coming days to discuss the situation.

The bloc suspended Mali following military coups in August 2020 and May 2021.

ECOWAS has frozen the financial assets and banned from travelling within West Africa all those it believes to be guilty of delaying the elections, in all about 150 people, including the prime minister and almost the entire government, and their families.

At a previous summit in November, West African leaders were informed by the head of Mali's transitional government, Colonel Assimi Goita that Malian authorities would not be able to respect their earlier commitment to hold elections by February.

Goita justified postponing the election and holding a national consultation which, he said, would be "indispensable" for peace and stability.

In a two-page letter to ECOWAS, Goita hihglighted the need to "create the conditions for transparent and credible elections", including stepped-up security operations, a new electoral law and the beginning on Saturday of a series of national forums aimed at building a consensus for the return to civilian rule.

"The return to constitutional order is and will remain my absolute priority," Goita said.

The country has been plagued by jihadists and other armed groups, along with violence of self-proclaimed vigilantes and bandits.

Despite the deployment of UN, French and foreign forces, the violence has spread to neighbouring Burkina Faso and Niger.

The regular forces are also accused of abuses, and there has been no improvement in Mali's security situation since the military took power.

ECOWAS also decided to maintain sanctions against the junta that seized power in Guinea, overthrowing President Alpha Conde on 5th of September, demanding a timetable for the return of civilian rule there.

It suspended Guinea and called for elections to be held within six months.

Guinea's strongman, Colonel Mamady Doumbouya, has promised to return power to civilians. But he refuses to be dictated to by a transitional period.