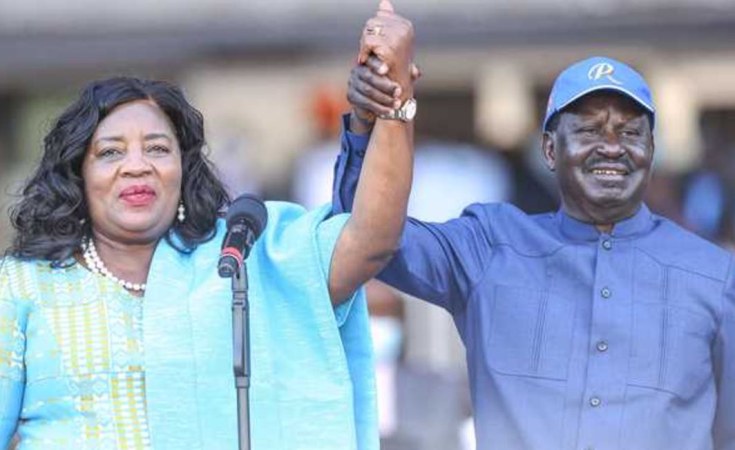 Sila Kiplagat / Nation Media Group
Raila Odinga with his wife Ida Odinga during the launch of his candidature for the presidential seat in 2022.
The Nation (Nairobi)
By Samwel Owino & Walter Menya

ODM leader Raila Odinga is betting on a high-level team of political and technical experts to run his campaigns as the hard part begins to finally land the presidency after he declared his bid on Friday, the Sunday Nation can reveal.

The team, referred to as the board, includes at least four governors, businesspersons and lawyers, among others. It will be backed by Raila Amollo Odinga Campaign Secretariat, which Sunday Nation understands is shopping for an office in Nairobi's plush Lavington Estate.

It is this team, according to multiple sources that spoke in confidence, which organised the Azimio La Umoja National Convention on Friday. During the event, Suna East MP Junet Mohamed, who was the master of ceremonies, introduced some of the board members who were sitting on the VIP dais a few seats away from Mr Odinga.

After the glamorous launch of his presidential bid, close aides and associates of Mr Odinga said the focus now shifts to formalising a coalition deal with Jubilee, selecting a possible running mate and hitting the campaign ground running.

With the board in place, the plan is now to form several teams below them to effectively run the campaign.

"Now we have a candidate and the next is to plan how the candidate will win the election. All that is being worked out. Different teams are being set up to work on different things. Some have been working and new ones will be formed. Others could also be consolidated. All these are being done to align the campaign to the reality that we now have a candidate," Mr Mohamed told the Sunday Nation.

According to Mr Mohamed, the former prime minister wants to run a sleek campaign that will neuter Deputy President William Ruto's outreaches that started in 2018.

The functions of the board and the teams that will be formed will be coordinated by the campaign secretariat. Sunday Nation has learnt that the real force behind the secretariat is Mr Odinga's daughter, Winnie Odinga, who is reported to be a key cog in his father's campaign. She was at the stadium and at one point was seen giving instructions to people to leave the main dais.

The secretariat has a CEO, Mr Ben Agina, who is understood to be the former political advisor to the British High Commissioner. A day before the Azimio La Umoja National Convention, Mr Mohamed and the MPs present let the cat out of the bag when he referred to Mr Agina as 'CEO' as they were conducting a dry run at Moi International Sports Stadium, Kasarani ahead of the Friday event.

It also appears that former television journalist Dennis Onsarigo will handle the media and communication aspect at the secretariat. He was greatly involved in the planning of the event and was the one taking the MPs through the plan. Alongside Mr Onsarigo is Mr Odinga's long-serving spokesman Dennis Onyango, who remains instrumental to the former Prime Minister's communication.

Mr Odinga, as expected, declared his candidacy for president on Friday. "On this 10th day of December 2021, I Raila Amolo Odinga, having been faithful and committed to building a national, democratic and progressive Kenya in our lifetime, having worked with many patriotic Kenyans to achieve this goal, I do hereby accept to present myself as a presidential candidate at the presidential election on 9th of August 2022 following the request and unanimous decision by this Azimio la Umoja," he announced at a packed Moi International Sports Stadium, Kasarani.

Kitui governor Charity Ngilu captured the what-next for Mr Odinga when she addressed the national convention on Friday.

"We are now going out of Nairobi to every village to get votes for you and we are ready," Ms Ngilu said.

Already, Mt Kenya leaders supporting Mr Odinga's presidential bid have developed a strategy to help him wrestle the region from the grip of Ruto.

Jubilee chairman David Murathe yesterday said that his earlier declaration that Mr Odinga will be the fifth president is now coming to pass, adding that they will walk with Mr Odinga in Mt Kenya and undo the lies people have been fed concerning his candidature.

"It is us who lied to the people of Mt Kenya with propaganda about Mr Odinga, and it is us who will go back there and unlock the lies we told them," Mr Murathe said.

The teams being set up will be the ones to work on the manifesto that will guide the former prime minister's campaign and its messaging.

Mr Odinga on Friday announced a highlight of his vision for the country, what he called "the People's Programmes" which will form the basis of his manifesto.

The 10-point programme has social protection, universal healthcare, employment creation, women empowerment, investing in youth, education for all, food security, water for all, enterprise Kenya and building on past successes.

"Very soon, I will unveil a detailed manifesto addressing other critical concerns like corruption, public debt, industrialisation, digital economy and promotion and protection of businesses and, particularly, protection of private property," Mr Odinga said on Friday at the launch of the Azimio la Umoja Movement.

"My manifesto will bear a crystallised description of the Ten Point Peoples' Programme, delving into the workings and plans that will actualise it for the people," he added.

One of the key amendments that will be considered by the National Assembly is Section 7 of the Act which proposes the introduction of a 'coalition political party'; which will be registered with the Office of the Registrar of Political Parties. ODM and Jubilee are looking for a vehicle that can directly sponsor candidates besides the parties.

"The bill is going to make our politics better. Coalitions are part of our political architecture. The bill aims to tie the loose ends that have caused past coalitions to fail," said Mr Mohamed.

Last month, Jubilee secretary-general Raphael Tuju said the discussion on the formation of the new coalition is being steered by President Kenyatta and Mr Odinga.

The bill also proposes amending Section 10 of the Political Parties Act 2011, which currently requires parties forming a coalition to deposit with the ORPP their agreement three months before the elections.

If the amendments sail through, then parties intending to form a coalition will be required to deposit the agreement at least six months before the elections, or by February 2022. For ODM and Jubilee, formalising their union six months to the elections will give them enough time to market themselves to the voters.

"Section 10 of the Principal Act is amended by adding the following sub-section... provided that in the case of a coalition political party, the coalition shall submit the agreement at least six months before the General Election," reads the proposed amendments.

Sources within Parliament told the Nation that President Kenyatta and Mr Odinga are keen on the passage of the bill before Christmas.

The two leaders have already told their troops to ensure that the amendments are passed without introducing any further changes that might dilute its intended purpose. The National Assembly is currently on recess and will resume sitting on January 25

The bill, which is sponsored by the Leader of the Majority in the National Assembly Amos Kimunya, has already gone through the first reading and now the public has been invited to present their views before the debate.

Mr Kimunya yesterday said at Kasarani that both the executive and the legislature must work together in harmony.

With Mr Odinga having declared his bid, the Sunday Nation has also learnt that the other key task is for President Kenyatta and Mr Odinga to settle on a running mate.

The strengths and weaknesses of each of the three will be assessed before settling on one.

The successful candidate will be expected to help Mr Odinga champion for the Azimio la Umoja clarion call across the country.

Close aides of Mr Odinga also say that Wiper leader Kalonzo Musyoka is firmly in the running mate position if he can agree to support the former prime minister for the third time. Mr Musyoka currently is working with ANC's Musalia Mudavadi, Ford Kenya's Moses Wetang'ula and Kanu's Gideon Moi under the One Kenya Alliance (OKA).

But with nearly two million votes from Ukambani, enough to tilt the presidential race, Mr Musyoka stands as a possible kingmaker, perhaps more than Mr Mudavadi who comes from the western region where Mr Odinga already enjoys substantial support.