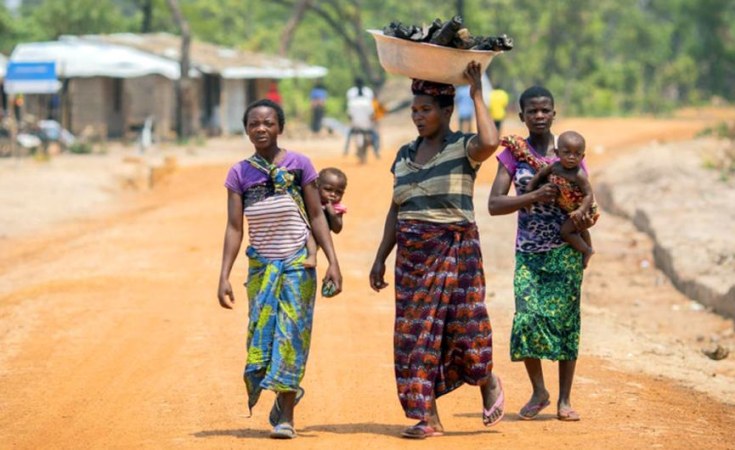 Will Swanson / UNHCR
Refugee women from the Democratic Republic of the Congo walk towards the market in Mantapala Settlement, Zambia (file photo).
Nile Post News (Kampala)
By Kenneth Kazibwe

The UPDF and FADRC, the Congolese army have announced the capture of Kambi Ya Yua described as the "much revered" Allied Democratic Forces camp in the thick DRC forests.

"Early on 24th December 2021, the UPDF mobile forces together with the FARDC assault force, finally captured the much revered ADF/ISCAP camp, Kambi Ya Yua. Kambi Ya Yua, a stronghold of ADF/ISCAP terrorists, seating on eight acres of Virunga forest land, is estimated to have accommodated over 600 ADF/ISCAP terrorists and their families. The camp was captured with limited enemy resistance and there was no effect on the joint forces," a joint statement read in part.

According to the UPDF, the captured camp was a host to military training and Islamic radicalization activities evidenced through the literature found, bomb making materials, a damaged Laptop computer, 129 live rounds of PK machine gun loaded in their chain, 155 live rounds of sub machine gun ammunition, three solar panels and ADF strength registers.

"The structures in the camp were well built with locally made fences; with many cleared under tree shades as seating areas, suggesting that it was likely to be a command post of a high-ranking rebel leader."

The UPDF said its engineers are now working around the clock to search for possible improvised explosives, bunkers and to acquire more clues about the ADF.

Col James Kasule, the UPDF Mountain Brigade Commander described the capture of the ADF main camp as a big milestone because "the enemy was using this same camp to launch terror attacks against both Ugandans and Congolese."

Lt Col Mbayo Katuta, the FARDC Assault Brigade Commander, who is commanding the ground forces in the jungles of Virunga forest said "We want to put ADF and other bandits on tenterhooks, with no breathing space, always on the run, block their supply chains. They will die of hunger in the forest. Soon you will see many surrendering when the situation gets unbearable."

Three weeks ago, the UPDF and FADRC launched air, artillery and ground attacks against ADF camps inside the thick DRC forests in an operation code named Shuja, a Kiswahili word to mean "bravery".

The UPDF Mountain Division Commander Maj Gen Kayanja Muhanga is the overall commander of the operation on the Ugandan side whereas Maj Gen Camille Bombele is in charge of the DRC forces, FADRC.

As part of the operation, the joint forces have attacked and overran several ADF camps including Kambi Ya Yua, Tondoli, Belu1 and Belu2 which are found in North Kivu province in Virunga and Ituri impenetrable forests of Eastern DRC.

The ADF has for several years operated in the volatile North Kivu which borders other provinces including Ituri to the north and South Kivu to the South and has been a battle ground for a number of rival armed ethnic groups since 1998.

The province consists of three cities including; Goma, Butembo and Beni as well as six territories--Beni, Lubero, Masisi, Rutshuru.

According to the Centre for Strategic and International Studies, the ADF which was designated as a terrorist group by the US government, has used the name Madina at Tauheed Wau Mujahedeen (City of Monotheism and Holy Warriors--MTM) to refer to emphasize its links to the Islamic State.

In 2019, the Islamic State claimed responsibility for an ADF attack and first referenced a "Central Africa Province."

The organization is led by Musa Baluku, who served as a senior ADF Islamic legal official before consolidating power following Mukulu's 2015 arrest.

The group has been blamed for the recent attacks in Kampala that left over seven people dead.

Thousands of Congolese Refugees in Zambia Opting to Go Home

Previous Story
Tagged:
Copyright © 2021 Nile Post News. All rights reserved. Distributed by AllAfrica Global Media (allAfrica.com). To contact the copyright holder directly for corrections — or for permission to republish or make other authorized use of this material, click here.