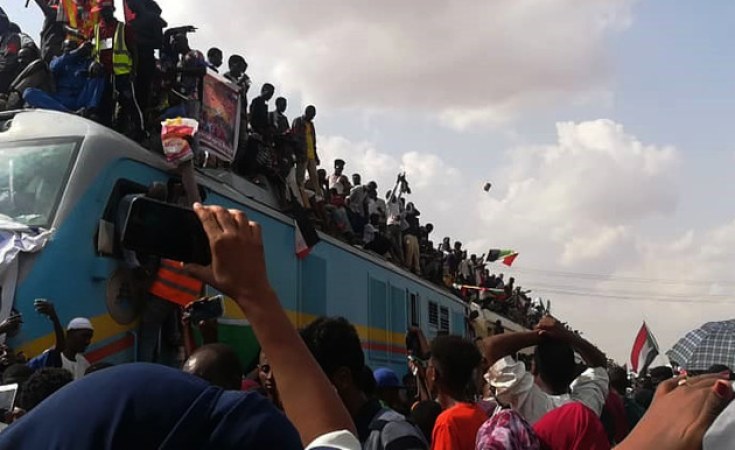 Sudanese security forces shot and killed four protesters on Thursday in Omdurman, the twin city of the capital Khartoum, according to medics, as thousands demonstrated against military rule. The country has been in limbo with no functioning government since a coup on 25th October.

"We call on doctors to come to the Arbain hospital in Omdurman because the putschists are using live rounds against protesters and preventing ambulances from reaching them," the pro-democracy Doctors' Committee said announcing the three deaths.

Tens of thousands of Sudanese protesters defied a security lockdown Thursday, braving tear gas and chanting "no to military rule" as they marched in rallies demanding a transition to a civilian government.

Demonstrators reached within a few hundred metres of the presidential palace, the headquarters of General Abdel Fattah al-Burhan who seized power on 25 October, before troops, police and paramilitary units launched multiple tear gas canisters into the crowd.

Pro-democracy activists have kept up a more than two-month-long campaign of street demonstrations against the army's takeover, despite a crackdown that has seen at least 52 people killed in protest-related violence, according to the independent Doctors' Committee.

Elsewhere, Saudi television Al-Arabiya said several of its journalists had been wounded in an attack by security forces on its Khartoum office.

Security forces deployed across Khartoum, using shipping containers to block the Nile bridges that connect the capital with its northern suburbs and its twin city Omdurman.

The bridges were blocked off for the last protests on 25th December, when tens of thousands took to the streets. Those rallies were also broken by tear gas -- as well as charges by police wielding batons and firing into the air.

Some 235 people were injured during those protests, according to the Doctors' Committee, which is part of the pro-democracy movement.

On Thursday, protesters demanded that soldiers "go back to the barracks", carrying those injured from inhalation of the tear gas.

New surveillance cameras were installed on the major thoroughfares for Thursday's protests, and for the first time, authorities also cut all phone lines, both international and domestic.

Web monitoring group NetBlocks reported mobile internet services were cut from mid-morning, limiting the ability of protesters to encourage supporters or to broadcast live footage of the rallies.

Witnesses reported similar anti-coup protests in Madani, south of the capital, and the cities of Kassala and Port Sudan in the east.

Burhan, who held civilian leader Prime Minister Abdalla Hamdok effectively under house arrest for weeks, reinstated him on 21 November under a deal promising elections for July 2023.

But protesters said the deal had simply given a cloak of legitimacy to the generals, who they accuse of trying to reproduce the former regime of autocratic president Omar al-Bashir, toppled in 2019 following mass protests.

"Signing with the military was a mistake from the start," one protester said, accusing the generals of being "Bashir's men".

The US embassy appealed for restraint, reiterating "its support for peaceful expression of democratic aspiration, and the need to respect and protect individuals exercising free speech," a statement said.

"We call for extreme discretion in use of force and urge authorities to refrain from employing arbitrary detention."

Activists have condemned sexual attacks during 19 December protests, in which the UN said at least 13 women and girls were victims of rape or gang-rape.

The European Union and the United States issued a joint statement condemning the use of sexual violence "as a weapon to drive women away from demonstrations and silence their voices".

Sudan still has no functioning government, a prerequisite for the resumption of international aid cut in response to the coup.

Over 14 million people, a third of Sudan's population, will need humanitarian aid next year, according to the UN Office for the Coordination of Humanitarian Affairs, the highest level for a decade.

Sudan Lawyer - Sovereignty Council Has No Right to Call for Elections