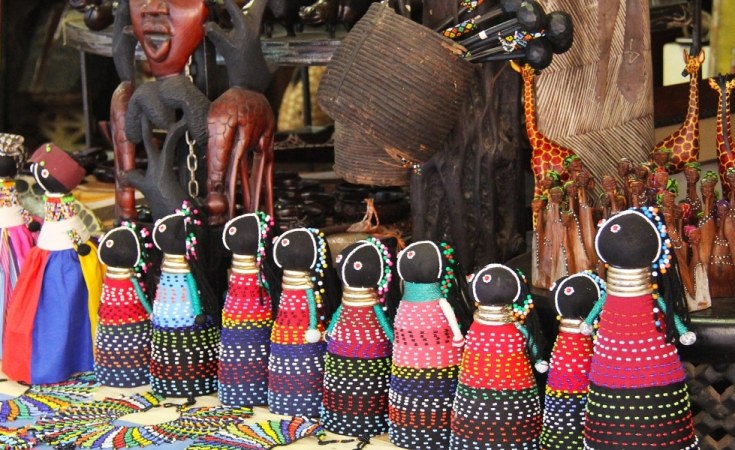 Creating jobs and hope for youth through laughter.

Like other sectors of the economy, the booming African creative industry is gearing up for the opportunities that the African Continental Free Trade Area (AfCFTA) offers. Top comedian, Daniel 'Churchill' Ndambuki's organization - Laugh Industry - is providing a platform and job opportunities for young artists in East Africa. He spoke to Raphael Obonyo. Here are the excerpts:

Africa Renewal: How did you get into stand-up comedy?

Mr. Ndambuki: I started acting in high school although I never featured prominently. I later picked up acting after high school, when I was scripted to work with Redykyulass - one of the best stand-up comedy groups in Kenya. I was the props guy working in the backstage until an opportunity arose one day when I was accorded a chance to act a small part. The director asked me to give it more attention, which I did. From then, I started writing scripts for the main actors. When they exited the scene, I stepped in to do the main act. I have been acting for more than 20 years now.

How did your upbringing influence your career?

I grew in the out skirts of Nairobi. My father was living with disability and it was a struggle going to school, but the community stepped in and supported in our education. I am lucky to have been accorded an opportunity to perform with Redykyulass.

When did you get the big break?

The main actors I was working moved on to other things - one went into politics and the other one moved on to corporate. For two years we had no show. The producer believed in me and urged me to take the challenge and roll out a weekly show. I took the challenge, started the now very popular 'Churchill Live' comedy show, and the rest is history.

What is the Churchill Live show about?

It is a weekly satirical comedy show. With time I realized that as much as I wanted to hog the entire 45 minutes of the show, there were so many other talented youths out there who needed a platform to showcase their talent. I decided to share my platform. Every week, I include other upcoming comedians and musicians on my show. That is the unique aspect of the show - so every week we have new talent. Now Kenyans, East Africans and Africans have owned it.

Comedy can be used to showcase the positive side of Africa. Comedians have an opportunity to change the narrative about Africa. Africa is prime, and this is the best time to tell our stories. There are a thousand stories like 'Wakanda' that are yet to be told."

How can comedy and the creative industry in general create jobs for the youth and address unemployment in Africa?

We need to create platforms for young people to showcase their talent and build their brands. Also, mentorship and coaching are critical for the progress of these creatives. We need hubs to nurture talents.

How have you managed to collaborate with other comedians in Africa?

I came up with the idea of a 'Laugh Festival', where we invite comedians from across Africa to perform. Some of the comedians that have performed at the festival include the famous Basketmouth from Nigeria, Carl Ncube from Southern Africa, Daliso Chaponda from Malawi who went ahead to finish second runners-up at the 'Britain's Got Talent' have talent.

Other top acts include Patrick Salvado and Alex Muhangi from Uganda, Arthur Nkusi from Rwanda, and Koi Mzungu from Tanzania, among others.

We plan to make Laugh Festival an annual event to bring together different comedians from Africa and beyond.

What are some of the challenges facing the creative industry in Africa today?

Comedians need a platform to grow and earn from their talent. In Africa, the creative industry is not seen as a source of income. It is not something people want to invest in. Under-investment and lack of infrastructure cause most creative workforce to be freelancers and grossly underpaid. I have had some very big losses. An engineer will tell you, I'm worth this much, a doctor will tell you, I'm worth this much. But most creatives don't know their value.

It is one year since the African Continental Free Trade Area (AfCFTA) was launched. How can it benefit young people in Africa?

It is a timely idea. The AfCFTA will provide a platform for young people in the creative industry to share ideas. We should build partnerships across Africa, find ways to collaborate and create networks especially online. Creating a free trade area, which allows content created by Africans to be easily distributed at this scale enables Africans to distribute widely, change their global narrative and exit the poverty cycle.

Comedy can be used to showcase the positive side of Africa. Comedians have an opportunity to change the narrative about Africa. Africa is prime, and this is the best time to tell our stories. There are a thousand stories like Wakanda that are yet to be told.

What do you see as some of the opportunities for collaboration through the AfCFTA agreement?

AfCFTA will create a single continental market, with free movement of businesspeople and investments, progressively removing the tariff and non-tariff barriers to the trade of intra-African goods and services, which have historically prevented creatives and cultural industry practitioners from easily accessing the rest of the continent.

This new massive regional market will eventually make it easier for Africans to monetize their creative and cultural work within Africa.

Intra and cross continental trade is about getting to know each other, and ourselves. How can creative, especially those in comedy, help in this area?

This is not just a free trade agreement, it is an opportunity for us to share ideas, and to generate and share content. AfCFTA will encourage youth to be more innovative and creative. However, the scalability of the creative industry within the AfCFTA will depend on the existence of a robust framework that supports Intellectual Property rights and digital security.

What should be done to help people in the creative and cultural industry to reap the benefits of increased intra-African trade?

Efforts should be made to help youth in the creative industry to tap opportunities created through AfCFTA. Skills development, enabling regulatory frameworks, financing, and markets are among some of the areas that require attention.

Can the AfCFTA create the market Africa's creative and cultural industries (CCI) need to finally have their work consumed by a homegrown market of a billion people?

The place of the creative and cultural industries in terms of potential contribution to national GDPs and job creation can hardly be over-estimated. The agreement can support creatives to benefit from the market, and by address some of the pressing challenges including lack of resources and market for people in the creative industry.

As AfCFTA begins to take shape, what can you demand on behalf of creatives?

In the fourth industrial revolution, content is king, and Africa is the continent of the future - whether it is on social media, music, or film and television platforms, or even in digital museums and galleries or Non-Fungible Token (NFTs)[these are pieces of digital content linked to the blockchain]. We need to create hubs and academies and provide resources and other forms of support for our artists including comedians.

What is your vision for comedy and creative industry in Africa?

I hope to see a 'Netflix' from Africa, where Africans are able to tell their own stories, starting from comedy, music or whatever else we do. Being able to showcase everything good from Africa.

To people of the world, welcome to Africa. To Africans, this is our time. Africa must realize that we are eagles - we have immense potential, we need to fly. It is our time. Most important, the AfCFTA has opened the door for artists, let us seize the opportunities that abound.

Previous Story
Tagged:
Copyright © 2021 Africa Renewal. All rights reserved. Distributed by AllAfrica Global Media (allAfrica.com). To contact the copyright holder directly for corrections — or for permission to republish or make other authorized use of this material, click here.