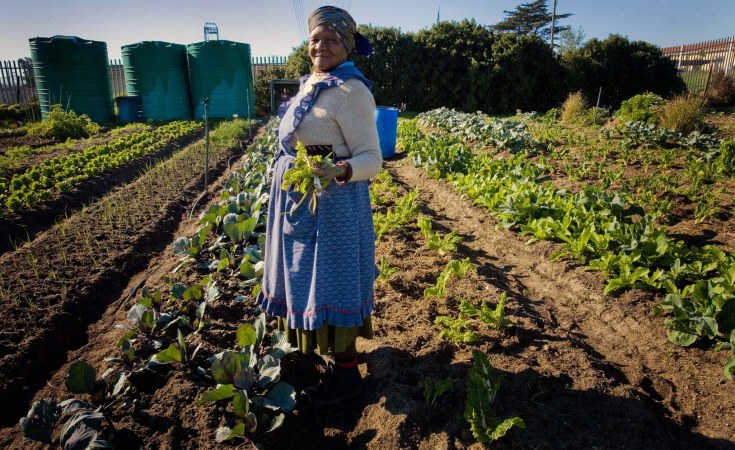 AUSAID SOUTH AFRICA/Department of Foreign Affairs and Trade/Flickr
Philipina Ndamane holds up some of the vegetables she has grown in the Abalama Bezehkaya garden in Guguletu, Cape Town, South Africa on June 9, 2009. The Abalami Bezehkaya project teaches people better farming techniques and sells fresh produce weekly to generate incomes for the farmers involved.
New Era (Windhoek)

During the third quarter of 2021, Namibia recorded a trade surplus of N$2.7 billion on agriculture, forestry and fishing products. The positive trade balance was mainly reflected in the fishing sub-sectors products, recording N$2.6 billion.

Trade surplus is the amount by which the value of a country's exports exceeds the cost of its imports. The Namibia Statistics Agency (NSA) stated that Namibia's export earnings from commodities of agriculture, forestry and fishing sector for 2021 Q3 increased to N$3.7 billion, from N$3.2 billion recorded in 2020 Q3.

Similarly, the import bill also expanded to over N$1 billion in 2021 Q3 compared to N$977.7 million registered in the corresponding quarter of 2020.

The agriculture sector is the backbone of the Namibian economy and the sector has over the years been one of the main drivers contributing to the national economy significantly. The sector continued to be the main engine to the economy due to its nature of creating sources of income, supporting the livelihoods of the majority of its people, food security, foreign earnings and provision of raw material to the manufacturing sector.

The value-added for the agriculture, forestry and fishing sector for the third quarter of 2021 was N$3.4 billion in nominal terms which represents 7.6% of gross domestic product (GDP).

In real terms, NSA said the sector recorded a growth of 3.9% in the third quarter of 2021 mainly due to the agriculture and forestry subsectors that grew by 5.3% and 12%, respectively. The fishing sector also recorded an increase of 1.9% in real value-added.

"The fisheries products including the manufactured fish, accounted for the highest in terms of foreign earnings, recording N$2.8 billion while in the second place, agriculture commodities brought income of N$564.5 million. In terms of imports, forestry commodities topped the list with an import bill of N$643.2 million during the third quarter of 2021. For the period under review, the food price inflation was lower than other commodities in the CPI basket," reads the update from NSA.

Tagged:
Copyright © 2022 New Era. All rights reserved. Distributed by AllAfrica Global Media (allAfrica.com). To contact the copyright holder directly for corrections — or for permission to republish or make other authorized use of this material, click here.