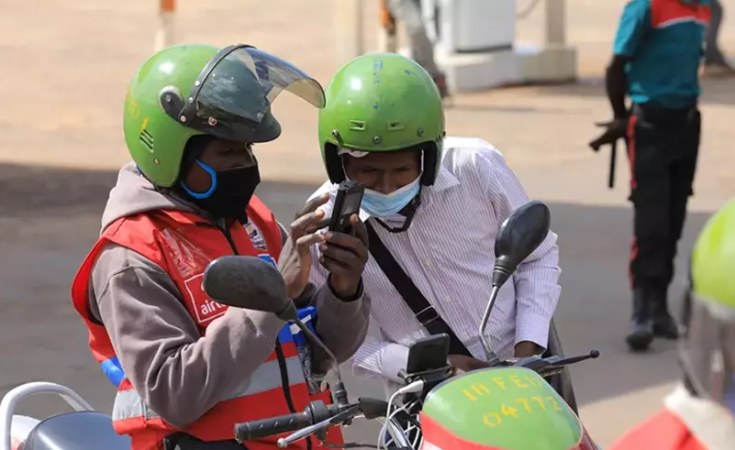 Effective Friday, January 7, the use of smart metres will be mandatory for all taxi-moto operators in Kigali.

Yego Innovision Ltd is the only company with the exclusive license to supply the metres.

In an interview with The New Times regarding the preparations ahead of the official launch Aline Uwamahoro, the Strategy and Partnership Manager at Yego Innovision said that they are ready and so far they have already installed close to 15,000 gadgets.

A taxi moto operator holds his metre and card after the receiving them from YEGO . Yego Innovision Ltd is the only company with the exclusive license to supply the metres.. Craish Bahizi

"As the only remaining player we had to take over within two weeks and install for all taxi moto riders in need and we managed to do it though we've faced some challenges so far we have installed 14,265 riders are ready to operate tomorrow," she said on Thursday.

Adding that the targeted number given by their stakeholders was 19,000 but for different reasons such as owners who are hard to get, some operators with debts with Rwanda Revenue Authority among other issues, they failed to meet the target on time.

However, she said that they were ready to install at least 600 gadgets every day to meet the target but the problem was on the rider's side to attend as expected.

Uwamahoro said that they have experienced a huge increase within the past two days.

She added that the installation is still ongoing till the time all beneficiaries are covered though she said that they anticipate that the number might increase and assured riders that they are prepared for it and ready to help them anytime.

Commenting on preparations, Jean Pierre Mubiligi, the coordinator of this project at RURA said that as they announced earlier they will enforce it on a communicated date and apply to all related beneficiaries.

However, he said that they are aware that some riders will not be able to have meters on time due to reasonable and communicated reasons for instance the ones with cases where it was hard to link with the owners of motors and others with appointments among others reasons.

Mubiligi said that together with other stakeholders such as the City of Kigali and Police they are ready to follow up and monitor the implementation of this development.

RURA also urges people (Passengers and Riders) to report all challenges they will face explaining that they are ready to make some changes where it will be necessary for the public interest.

"We need people to give us feedback for better implementation of this system and all stakeholders agreed to take actions where it will be necessary" Mubiligi Explained.

He also added that for moto riders they sign a two years contract with suppliers to pay for the services and after two years there will be assessments and tariff reviews.

Riders and passengers are ready and prepared for meters as all Kigali-based riders will not be allowed to work without smart meters.

Nancy Umutesi, a student at AUCA University who uses a motorbike on a regular basis, told The New Times that she is prepared to embrace this technology again because bargaining was sometimes hard.

She added that even the prices are now fair compared to the previous ones.

Enias Dushimirimana, a motorbike rider who operates mostly in Gasabo District said that he is equipped to hit the road with a meter tomorrow as long as the clients will be cooperative.

"Am prepared for tomorrow... I have a working gadget but the challenge would be on clients' sides who might refuse to let us use meters otherwise we are ready to work with it and report the challenges we might face" he said.

Felix Niyonkuru, another motorcyclist said that he is aware of the mandatory use of smart meters however, he won't have a gadget yet due to different reasons on the owner's side but he has an appointment next week with the suppliers to fix it.

The prices have been slashed the first two kilometres, the price is Rwf300 while the Rwf107 per kilometre for the rest of the journey.

However, beyond 40 kilometres, the tariff changes from Rwf107 to Rwf187.