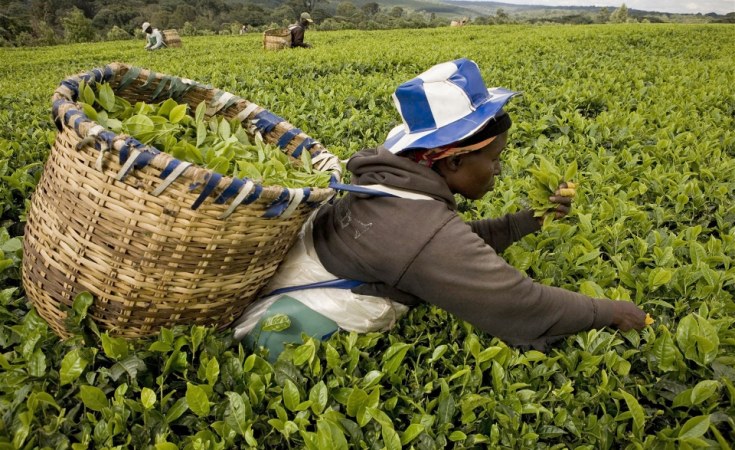 Siegfried Modola/IRIN
Pickers attend to a tea plantation in Kericho, Kenya. A study has recently revealed that African nations can break dependence on food imports and produce enough to feed a growing population within a decade
Capital FM (Nairobi)
By Susan Nyawira

Nairobi — Kenya's tea has continued to perform dismally in the international market with the earnings of the commodity dropping by 9.1 per cent in the third quarter of 2021 compared to a similar period in 2020, Kenya Nation Bureau of Statistics (KNBS) data shows.

According to the Q3 2021 Balance of Payments report prepared by KNBS, earnings from the export of tea deteriorated from Sh30.5 billion in the third quarter of 2020 to Sh27.7 billion in the review period.

The earnings have also been dropping when compared to the other quarters of 2021 where in Q2(April to June) the country got Sh32.2billion from tea exports, while in Q1(January to March) the country earned Sh35.8billion from the commodity.

The declining value of one of Kenya's leading exports was so alarming that the Ministry of Agriculture had to intervene and set a minimum selling price to save farmers who were incurring losses as the price was lower than the cost of production.

The minimum reserve price of $2 was introduced by the Ministry of Agriculture in August 2021 after the cost of the commodity hit a decade low of Sh186.

The price rallied for two months after the introduction of the minimum price that buyers were supposed to pay for Kenya Tea Development Agency teas, peaking to a five-year high of Sh256 before it started dipping again in October.

Tea farmers in the country are poised for better returns this year as government reforms enter the second half of the 2021/22 financial year.

Despite the dismal performance of the country's tea in the quarter under review, domestic exports were valued at Sh160.2 billion representing a 10.6 percent increase from the corresponding quarter of 2020 where they were valued at Sh144.8billion.

The growth was largely on account of an increase in domestic exports of horticulture, articles of apparel and clothing accessories, edible products and preparations, and titanium ores and concentrates.

Under the Broad Economic Category, significant increases were exhibited in the domestic exports of non-food industrial supplies and consumer goods which rose by 20.5 percent and 16.3 percent, respectively.

On the other hand, revenue from domestic exports of food and beverage commodities continued to account for the largest share of the total export earnings, valued at KSh 65.1 billion in the quarter under review.