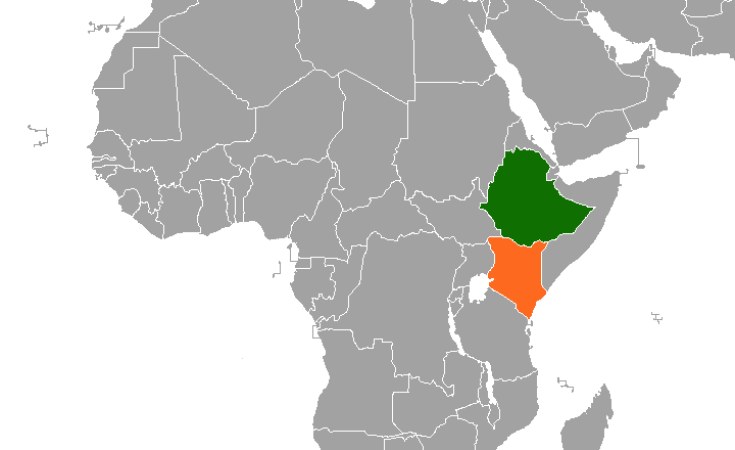 Aquintero82/Wikimedia Commons
A map showing the location of Kenya (in orange) and Ethiopia (in green).
Capital FM (Nairobi)
By Carolyne Tanui

Nairobi — Exports to Ethiopia more than doubled rising by 68 percent in the third quarter of 2021 compared to a similar period in 2020, data released by the Kenya National Bureau of Statistics (KNBS) has said.

The increment from Shs 1,927 billion to Shs5963 billion was attributed to the rise to increased food exports to the East African country which has been hit by a political crisis over war between government forces and the rebel Tigray People's Liberation Army (TPLF) in the north of the country.

Overall, the Balance of Payments report prepared by KNBS noted that Kenya's export value rose by 7.5 percent with Africa accounting for the highest value at Sh78,389 billion.

"This growth partly resulted from increase in the value of domestic exports of food preparations for infants to Ethiopia and electric generating sets and converters to Tanzania," the report noted.

Nonetheless, over the same period, exports to Uganda and South Sudan shrunk by 12.7 per cent and 37.5 per cent, respectively.

Domestic export s(goods grown , produced within Kenya) were valued at Sh160.2 billion representing a 10.6 percentage increase from the corresponding quarter of 2020,

The growth was largely on account of increase in domestic exports of horticulture, articles of apparel and clothing accessories, edible products and preparations, and titanium ores and concentrates.

Export earnings from the European Union marginally rose by Sh0.7 billion billion, exports to Asia recorded a slight increase of 3.3 per cent while the value of exports to the United States of America rose by 31.2 percent.