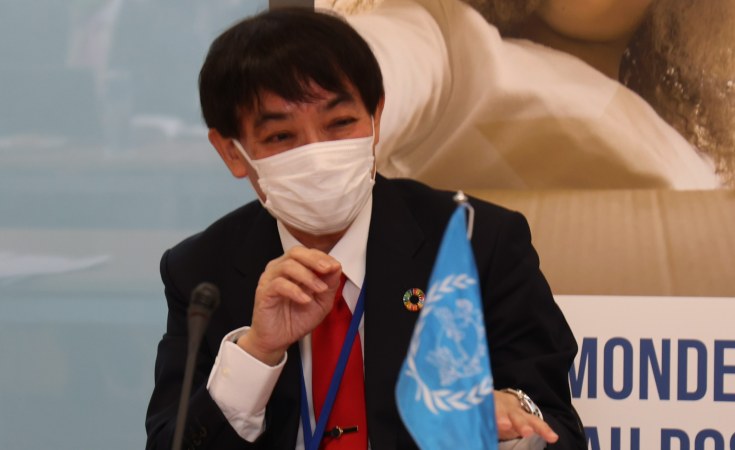 Bern, Switzerland — Some people in Africa don't have a mailbox; some don't have a physical address, but they are likely to have a smartphone, and they want to do e-business, so they need the post office, the Universal Postal Union (UPU) says.

E-commerce and postal services were highlighted at a January 5, 2022 press conference at the Universal Postal Union during a changing of the guard when the new director-general Masahiko Metoki introduced himself at the UPU headquarters in the Swiss capital Bern.

Metoki, from Japan, was sworn in after being voted in as the new UPU head at a Covid-delayed conference in Abidjan in August to replace Kenyan Bishar A. Hussein, who had served in the position from 2013.

"Because of the experience of Covid-19, we now have new opportunities, such as the development of remote communications and also the outstanding improvement of e-commerce," said Metoki.

"This time has not been easy, especially for developing countries. Because of Covid-19, we have realized the importance of the social responsibility of postal operations," said the new global postal chief.

"The developing countries have suffered especially from Covid-19. Even before, they had suffered from an unfortunate shortage of resources and inefficient operations."

The coronavirus pandemic has driven trade in information and communications technology (ICT) goods. But steep declines have occurred in the least developed countries and Africa, according to UNCTAD, the UN Trade and Development agency.

Global exports of ICT goods increased by 4 percent, to over U.S.$2.3 trillion in 2020. Meanwhile, imports of such goods grew by 1.1 percent, rising $27 billion to almost $2.5 trillion, UNCTAD said after it released data in November.

The upward trend in ICT goods exports was driven by eastern and southeastern Asia, where they surged by 8 percent, according to UNCTAD. In all other regions, exports declined, but by far, the sharpest drops were in the least developed countries (LDCs) (-82 percent) and Africa (-48 percent).

"We have a chance to talk directly to the developing countries and their governments and to provide them with direct possibilities," said the UPU's Metoki.

He believes African countries can use the UPU's expertise to hone postal services so they can embrace electronic commerce.

Established in 1874, the UPU is the second oldest international organization with 192 member nations.

"We have a chance to talk directly to the developing countries and their governments and to provide them with direct possibilities. The post will become a solution for medicine transportation by using its vast infrastructure," said Metoki.

The UPU's deputy head Marjan Osvald from Slovenia, told AllAfrica, the UPU is aware of the vital role that the post plays.

"In Africa, and indeed in Latin America and other countries, we can have people who don't have a private mailbox at their home. They might not even have a physical address, but they often have a smartphone," said Osvald.

"So, this is a giant jump into the digital society that can leave them unprepared for the role post could play in the future," said Osvald.

He explained that public or private sectors can offer postal service, and African countries know that with technical giants such as Amazon and Volt coming to the fore, the landscape is not easy.

"I believe that if designated postal operators do not rapidly develop a strategic plan for the future, they may push themselves out of the market forever," Osvald cautioned.

Still, he said, "There is a quality-of-service fund available for African countries and all least developed and developing countries. There is funding available for different projects," said the UPU official.