Gambia/Mauritania: Historic Victory for the Gambia 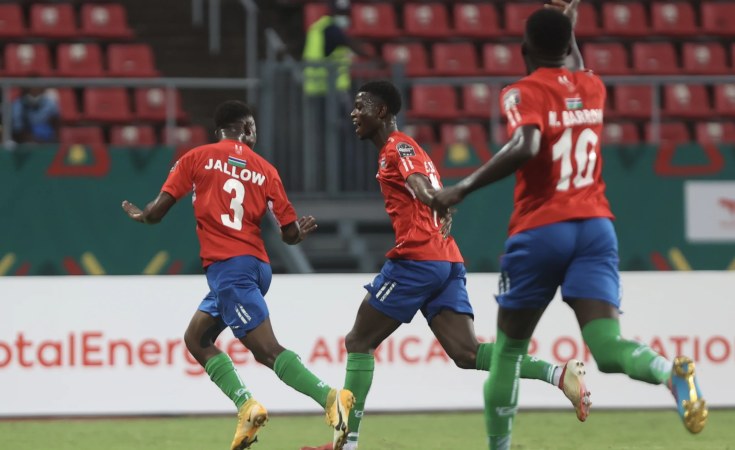 A day of history. The Gambia' Scorpions achieve a historic feat by winning their first match for their first appearance in AFCON finals.

The RFC midfielder Seraing also entered the history of Gambian football, scoring the only goal of the match. First achievement for The Gambia in TotalEnergies Africa Cup of Nations, Cameroon 2021.

The Scorpions started the game very strongly in Limbé, making the Mourabitounes doubt with a goal action from the tenth minute.

Barrow found Ablie Jallow who controled the ball from the right before putting a dry strike with his left foot into the net of goalkeeper Diop Babacar.

After this goal, the Mauritanians tried to get back to the mark and played very high, but the Gambian defense, well around their goalkeeper Jobe Modou annihilated all actions.

Neither Ba Papa Ibnou, nor even Captain Aboubacar Kamara succeeded in breaking the wall of the Scorpions.

After the break, the Mourabitounes played their game with forays to the sides, or collective combinations, but always in vain against Modou.

Neither the intention of Fofana Gussouma's comrades, nor even the application and experience of Le Havre Ibnou were enough to set the record straight.

On the other side, the charges of Tom Saintfiet played blocks and controled the ball to hold this first historic victory for the Scorpions.

The Gambia, which is the only team to have made it through the playoffs and then the qualifying group stage for the 2021 TotalEnergies Africa Cup of Nations, finishing first in their group ahead of Gabon can celebrate their entry. Three precious points for captain Pa Modou Jagne and his teammates who join Mali at the top of Group F.

What they said after the match

Moussa Barrow, Captain and Man of the Match

"It is an honor for me to be the Man of the Match for Gambia's first Africa Cup of Nations game. My college scored an extraordinary goal which delivers a whole nation. We will continue to play match by match and look for a place in the second round. I am happy and proud of our collective work".

Tom Saintfiet, Coach of The Gambia:

"We were the little thumbs, the outsiders, a small country but with quality players, competitors at heart. We will try to win each match, by not putting unnecessary pressure on ourselves. We are realistic, the second game will be even more disputed. We won our first historic AFCON match. It's amazing what happens to us when we look in the rearview mirror".

"A timid start to the match, complicated with too much technical waste. We made a lot of mistakes, we paid for it dearly with this goal which came very early.

We're not looking for excuses, it's a shame that we missed the start of the game. We are going to look for another game system, another animation to will cause problems for Tunisia during the next match."