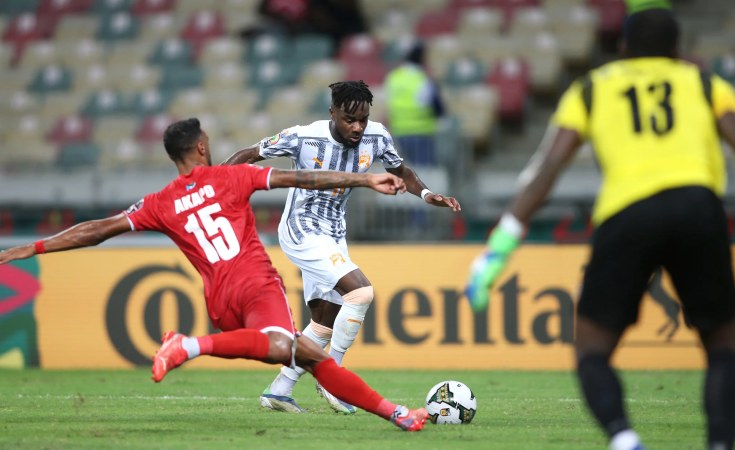 All eyes were on Group E once again as Cote d'Ivoire played out an entertaining match against Equatorial Guinea in their opening fixture of the TotalEnergies Africa Cup of Nations at the Japoma Stadium in Douala on Wednesday.

Patrice Beaumelle's side shot to the top of Group E after a 1-0 victory against the well drilled Nzalang Naciona. Cote d'Ivoire were coming into the match as favourites opened the scoring early on.

Equatorial Guinea nearly found the equalizer, Basilio Ndong's left footed shot from outside the box is saved in the bottom left corner by Badra Ali Sangare.

Ibrahim Sangaré had a chance to double the lead for the Elephants but his header from the centre of the box is too high after a wonderful cross by Franck Kessié.

Nzalang Nacional were beginning to pile the pressure on the Elephants in the last quarter of the first half. Saúl Coco's right footed shot from the left side of the box was close, but missed to the left hand side of Badra. Coco was in the thick of things again with another attempt blocked in the six yard box.

The first half ended 1-0 in favor of the Cote d'Ivoire.

The second period began as the first ended with Equatorial Guinea on the front foot looking to get back into the match. Dorian Hanza threatened but his header was just wide of goal from Emilio Nsue's cross.

Nsue has a chance himself to get a goal and put his team on level terms.

A searching ball over the top by José Marchín found the captain but his right footed shot didn't have enough bend to beat the Elephants keeper Badra.

In an attempt to seal the game Beaumelle made a triple substitution with Nicolas Pépé replacing Max-Alain Gradel. Wilfried Zaha came on for Maxwel Cornet while Serey Dié replaced Franck Kessié.

Zaha saw his effort skim wide of goal moments from the end of the game. The Elephants would eventually hang onto their 1-0 lead and claim three points to go top of the table in Group E.

"A lot of players could have earned that honor tonight, but like it's me, I take it, it's deserved. Regarding the match, we have to remember the victory and regarding the competition, we arrived with a lot of motivation, sad events must multiply this desire to do well. We were very keen to please our two friends who are going through difficult times ".

'We'll hold back the victory at the end of this meeting. Sierra Leone has made us suffer and I am not at all surprised even if our adversary remains ourselves. If we learn to play simple, nothing bad can happen to us. I really liked the first 15 minutes with the fluidity, simplicity and the collective put forward. We did not continue to play like this, it allowed our opponent to believe in it and to deploy his game. It was difficult but we will hold back the victory and this group will be difficult until the end, Sierra Leone and the Equatorial Guinea are not stooges, they deserve their qualification for this competition. "

"Congratulations to Cote d'Ivoire on their victory but overall, we deserve better. We played well with clear chances. We have failed to make them happen. Now, we must start the work tomorrow to correct the mistakes made and come with more certainty against Algeria on Sunday. Like Cote d'Ivoire, this Algerian team is among the favorites, but we have the means to go for the victory. A game that is never like another."