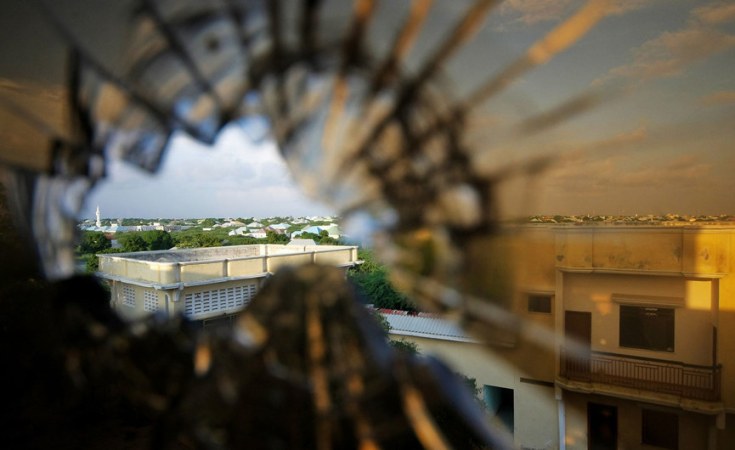 Stuart Price/UN Photo
The skyline beyond the northern suburbs of Mogadishu in Somalia, seen through a bullet hole in the window of a hotel (file photo).
Deutsche Welle (Bonn)

Several people were killed as a huge blast went off on a road near the main international airport in the Somali capital. The al-Shabab extremist group has claimed responsibility.

An explosion in Somalia's capital Mogadishu on Wednesday killed several people, the head of the city's ambulance services said.

The Islamist terror group al-Shabab claimed responsibility for the explosion, saying it was targeting "foreign officers."

The al-Qaeda-linked group controls parts of Somalia often carries out bombings at high-profile locations in the capital.

What do we know about the explosion?

"A car bomb targeted a convoy, including bullet proof cars using Avisione street, we do not who owns the convoy. We carried eight dead people from the scene," Abdikadir Abdirahman, director of an ambulance service, told Reuters.

According to witnesses quoted by the AFP news agency, a multi-vehicle private security convoy escorting foreigners was passing by the area when the blast hit.

A witness also told AFP that the explosion was "so huge that it has destroyed most of the buildings nearby the road and vehicles passing by the area."

What is the situation in Somalia?

The Horn of Africa nation had been locked in a political crisis amid a feud between the prime minister and president.

Somalia is also battling an insurgency by al-Shabab.

The extremist group has been fighting government forces since 2007. It had controlled Mogadishu until it was pushed out by African Union forces in 2011.

Al-Shabab has often carried out attacks against military and civilian targets.

In November, al-Shabab claimed responsibility for a car bombing near a school in Mogadishu. The attack killed at least eight people.

The November attack came days after the group said it killed a prominent journalist.