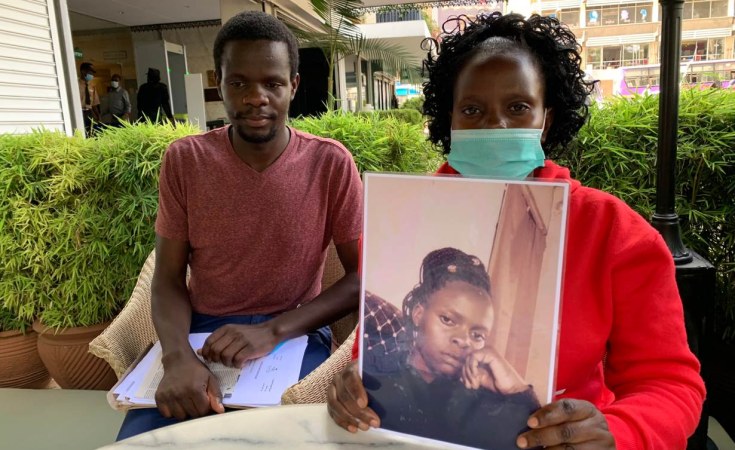 Nita Bhalla / Thomson Reuters Foundation
Beryl Aluoch and Stephen Aluoch pose with a picture of their sister Caroline Aluoch who died while working as a domestic worker in Saudi Arabia in April 2021. Taken in Nairobi, Kenya on Nov. 11, 2021.
Inter Press Service
By Joyce Chimbi

Nairobi, Kenya — Distress calls from vulnerable Kenyan women in Saudi Arabia experiencing mistreatment and torture at the hands of their employers went from 88 in 2019/2020 to 1,025 just one year later.

And this fear is all too familiar for 28-year-old Wanjiku Njoki. The young woman's whose search for greener pastures in the Gulf landed her in the hands of a physically, mentally, and verbally abusive employer.

In 2018, she travelled to Jeddah in Saudi Arabia.

That year, Wanjiku was one of an estimated 57,000 to 100,000 Kenyans who travel to Gulf countries, including Saudi Arabia, Qatar, and Bahrain annually, for unskilled and semi-skilled work, according to the Ministry of Labour, Social Security and Services.

"I heard stories of suffering and death, especially from Saudi Arabia, but the recruiting agent told us they only work with employers who have no history of abuse," she tells IPS.

"They also lied about the salary. I received $180 per month and not the $700 promised. My employer would pay me, make me sign a document confirming the payment and then steal the money back. When I told them about the missing money, the man and his wife would slap me and refuse to feed me."

Her life as a shagala, which she says is Arabic for house helper or servant, became a year-long nightmare. With her passport and mobile phone confiscated by her employer, cutting her off from the rest of the world, she saw no way out.

"I worked from 5 am to midnight every day. I spoke only when spoken to and was very depressed. With time, I befriended the gardener who allowed me to secretly use his mobile phone," she says.

Eventually, she connected with Kenyans in Saudi Arabia through social media, who told her how to escape, get arrested and deported. In 2020, Wanjiku returned to her village in Kagongo, Kiambu County, empty-handed but alive.

Saudi Arabia has a modern slavery prevalence rank index of 138 out of 167 countries as per the Global Slavery Index. The index also estimates that 61,000 people live in modern slavery and that 46 out of every 100 people are vulnerable to modern slavery.

Confronted by unemployment rates that are among the highest in the world as per the UN's International Labour Organization (ILO), hundreds of vulnerable women like Wanjiku continue to take, more often than not, a doomed voyage to the Gulf.

The parliamentary committee on labour and social welfare indicate the number of Kenyans working in Saudi Arabia has risen from 55,000 in 2019 to 97,000. The number of deaths and distress incidences has also increased.

Thus far in 2021, three deaths have been reported in Qatar, one in the United Arab Emirates, two in Kuwait, nine in Oman and two in Bahrain.

"There are at least a hundred backstreet agencies linking workers to the Middle East. Only 29 agencies are government approved and licensed. Many agencies are very greedy and are least concerned with the safety and security of their recruits," says Suzanne Karanja, a Nairobi-based recruitment agent.

"There is money to be made because a prospective employer will pay me $1,800 to $2,000 per head to facilitate travel to their country. Most agents do not intervene when trouble comes. Their work is done once they receive the commission."

Karanja says the slave and master scenario presents itself among female domestic workers and employers in the Middle East mainly because employers incur the entire cost of processing travel documents, training, and travel.

She tells IPS that a potential employer pays at least $2500, split between a recruitment agent in the country of origin and the destination country.

If the recruited domestic worker leaves before the contract is completed, employers insist on a refund.

She says the government must step up and crack down on backstreet agents for violating terms of operation, not registering their businesses at a cost of $5000 or paying the $5000 to $10 000 once-off bond.

The $5,000, she says, is supposed to be used to rescue distressed women who, so far, are rescued by Kenyans of goodwill when their distress stories circulate on social media.

Additionally, Karanja speaks of Kenyans illegally detained in the Middle East for challenging poor working conditions and others stranded and living on the streets hoping to be arrested and deported.

"All the deaths are among young women, and their employers say they died of cardiac arrest. How is this possible? Young, energetic women who went through and passed mandatory medical tests dying within one to four years of being in the Middle East?" Karanja questions.

Wanjiku says that the Kenya Embassy in Saudi Arabia should be scrapped because it is notorious for turning a blind eye.

"Families of women who died in the Middle East have video and text message evidence of their loved ones crying for help, but the embassy and agents did nothing to rescue them. The women record themselves on mobile phones and send these videos to their families and social media but help only comes through ordinary Kenyans."

Parliament's Standing Committee on Labour and Social Welfare travelled to the Gulf region in April 2021 to find solutions to the crisis.

Karanja stresses that the situation is dire, prompting the Foreign Affairs Principal Secretary Macharia Kamau to write to the Ministry of Labour in July 2021, strongly recommending a temporary ban on recruitment and export of domestic workers to Saudi Arabia until protection measures are in place.

Thus far, no concrete actions have come from the recommendation or others made by politicians after the Gulf visit. Meanwhile, blinded by poverty and desperation, vulnerable women continue to make their way to the Gulf.

Tagged:
Copyright © 2022 Inter Press Service. All rights reserved. Distributed by AllAfrica Global Media (allAfrica.com). To contact the copyright holder directly for corrections — or for permission to republish or make other authorized use of this material, click here.