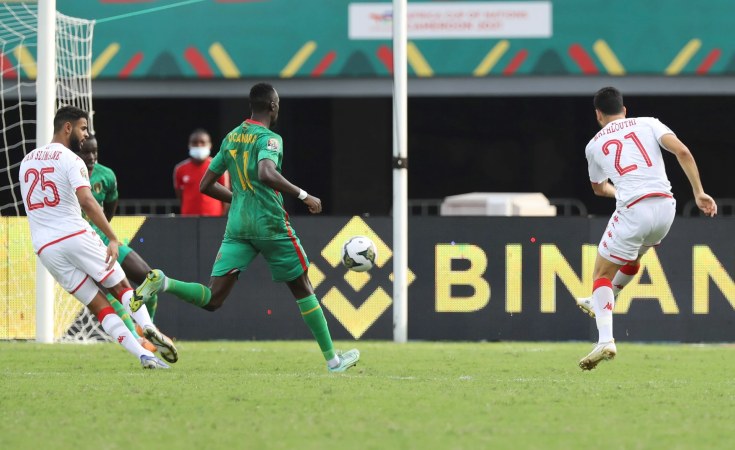 Carthage Eagles dominated the game led by Wahbi Khazri who produced a brilliant performance and scored a brace past Mauritania goalkeeper Babacar Diop.

Tunisia coach Mondher Kebaier fielded a changed team compared to the first match loss to Mali. They took the upper hand from the start with an opener from Hamza Mathlouthi, who received Khazri pass to fire home after 4 minutes.

Five minutes later, Khazri doubled Tunisia's lead after a nice collective work, with the Carthage Eagles putting the game to bed as early as the ninth minute.

Tunisia continued to dominate while the Mourabitounes depended on counterattacks through Thiam and Kamara.

After the break, Mauritania increased their pace trying to reduce the deficit, but the Tunisian defense led by Ali Maaloul let nothing through.

Just after the hour mark, Khazri completed a very nice collective work and a one-two action with Ghilane Chaalali to score the third Tunisian goal and complete his personal brace.

The Tunisians miss eda penalty at the very end of the match, when skipper Youssef Msakni rebounded from the right post.

Tunisia now have three points, one shy of Gambia and Mali. Mauritania remain at the group's bottom while they bid farewell to the tournament.

"I have a lot of experience. I am not a player who doubts, today it was the strength of the group. If we are united by working together, we can go far in this competition. I am happy with this collective reaction. We are going to get stronger, we have to confirm against Gambia."

"We made a very bad start, too much technical waste. It's shameful, very disappointed with the content, the way. We wanted to make the country proud, that's the disappointment. We created some opportunities. We revolted but timidly."

"The first match was laborious, we expected a feeling of revolt. It was necessary to make a reaction of men, of honor. We started the match well, the players were determined to continue at the same pace. We must have this hatred of defeat, vary our game, correct the transmissions to try to beat Gambia in the next match."