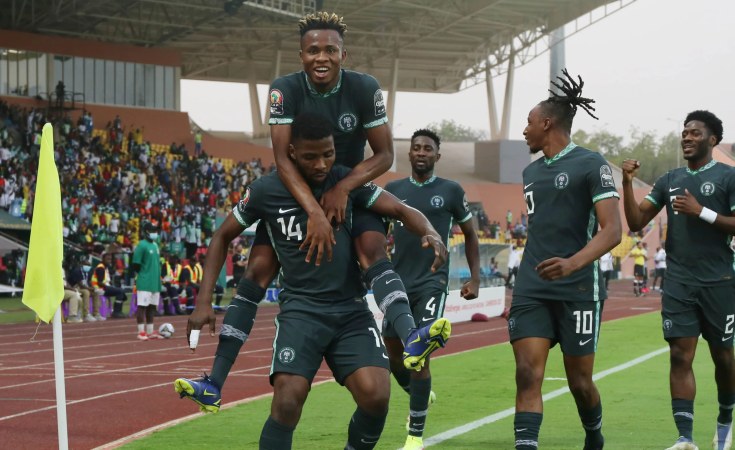 Some women in the Igando-Ikotun Local Government Development Council Area of Lagos State, on Sunday, wished for an end to the ongoing 2021 Africa Cup of Nations (AFCON) in Cameroon.

In separate interviews with the News Agency of Nigeria (NAN) in Lagos, some said that the control of who watches what on the television had made it impossible for them to watch their favourite television shows.

Nkechi Uba, a POS operator, told NAN that the Super Eagles performance at the tournament had made it impossible for her husband to ignore the tournament as he did before.

"My husband pays so much attention these days since the tournament started, most especially with Nigeria's performance, he now takes pleasure in analysing the matches.

"I just can't wait for it to end, after watching Nigeria's match he still watches other countries' matches, why? Where does his loyalty lie," she said.

Olamide Taiwo, a businesswoman who deals in children clothes, told NAN that her consolation was in the fact that she has to wait for a repeat of her programmes.

"If not that Zee World and Telemundo always repeat their shows, it would have been more painful, but at least I watch it again.

"I understand that it's not all the time that my husband drags the remote with me, but DSTV has done it so that you can catch up on all the shows.

"Although I still can't wait for it to end because most times my friends are calling and giving me spoilers, at least I get to watch it again," Taiwo said.

All other women spoken to about the AFCON expressed the same feeling as they can't wait for the competition to end.

The AFCON, which kicked off on January 9 would end on January 6 in Cameroon.

Kingsley Orji told NAN he doesn't think that most men like to disturb their wives during such tournaments as they would rather watch with friends at a bar.

"Naturally, most men will rather watch at a joint, where they can drink and exchange banter with fellow men and have a good time, but these women will think you're out doing something shady.

"So, if missing their shows is the price they have to pay then so be it because once you watch at home they are rest assured that you are not up to anything," he said.

Jerad Okon, a taxi driver, told NAN that although he doesn't mind watching at viewing centres, his wife makes it comfortable for him whenever he is home to watch the matches.

"She won't even mind if I'm home, I am rarely home due to the nature of my job, and she makes it comfortable and ensured my beer was available.

"We don't have to fight over who handles the remote, we understand each other that AFCON comes once in two years or so, she will do anything to make me watch at home, he said.

After their first two group matches, the Super Eagles' next match in Group D against Guinea-Bissau comes up on Jan 19. (NAN)

Tagged:
Copyright © 2022 Daily Trust. All rights reserved. Distributed by AllAfrica Global Media (allAfrica.com). To contact the copyright holder directly for corrections — or for permission to republish or make other authorized use of this material, click here.