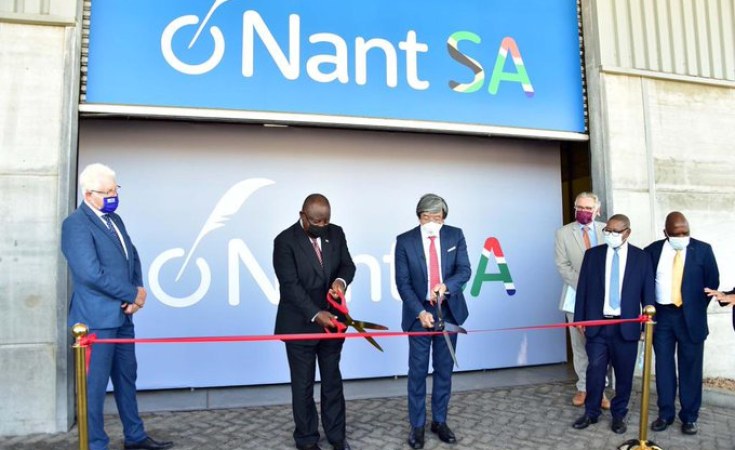 A vaccine-manufacturing facility to improve Africa's ability to produce jabs for diseases including COVID-19 opened after an investment by a South African-American billionaire. Follow DW for the latest coronavirus news.

South African-born biotech billionaire Patrick Soon-Shiong opened a plant in Cape Town, South Africa, that will be the first on the continent to produce COVID-19 vaccines from start to finish.

The NantSA facility aims to produce a billion doses annually by 2025.

The plant is South Africa's third vaccine manufacturing facility, but it would make vaccines itself rather than producing them from semifinished batches.

Soon-Shiong, who is also a medical doctor, will transfer technology and materials from his California-based NantWorks to scientists in South Africa to produce second-generation vaccines "within the year." They will also work on vaccines targeting cancer, TB and HIV.

"Africa should no longer be last in line to access vaccines against pandemics," South African President Cyril Ramaphosa said at the opening of the plant.

"These doses represent only around half of what the continent needs to vaccinate 900 million people in order to achieve the 70% target set by the World Health Organization," said Ramaphosa.

Here's a roundup of the latest developments on COVID-19 from around the world:

British Prime Minister Boris Johnson announced that people in England would no longer be required to wear face masks from next week.

He told Parliament on Wednesday that measures introduced to combat the omicron variant were no longer needed as scientists believe infections have peaked in the UK.

"Because of the extraordinary booster campaign, together with the way the public have responded to the Plan B measures, we can return to Plan A in England and allow Plan B regulations to expire as a result from the start of Thursday next week," Johnson said.

He intended to drop self-isolation rules for people with coronavirus in March.

The prime minister also announced an end to the vaccine certificates mandate but added that businesses could continue asking for COVID-19 passes if they wanted to.

Germany recorded more than 100,000 daily COVID-19 cases for the first time. The new single-day record of 112,323 comes as Health Minister Karl Lauterbach said he believed there could be twice as many unreported cases as known ones.

Lauterbach told broadcaster RTL that Germany had not reached the peak and compulsory vaccination should be introduced by May.

"We have close to 30,000 infections. That is a frighteningly high figure," Chancellor Karl Nehammer said.

Sweden set a new daily record for COVID-19 cases, registering 37,886 on Tuesday, health agency data released on Wednesday showed. The country is in the middle of a fourth wave of the pandemic.

Kronoberg, one of Sweden's 25 health care regions, said it would pause all testing except for hospital and elderly care patients and staff.

In Slovenia and Croatia, laboratories can not process tests fast enough. The two countries recorded record-high new COVID-19 cases of 12,285 and 10,427, respectively.

The UN health agency said infections increased in every world region except for Africa, where cases fell by nearly a third.

The number of deaths globally remained similar to the previous week, at about 45,000.

The United States plans to distribute 400 million N95 for adults free of charge from next week.

Speaking on condition of anonymity, a White House official said the masks would be available at pharmacies and community health centers.

Authorities said omicron was causing fewer hospitalizations and deaths than the delta variant, which killed hundreds of thousands of people in India last year.

While infection rates have recently fallen in India's big cities, experts say cases nationally could peak by the middle of next month.

"We have to worry about hospitalization and deaths and that will come later," Tarun Bhatnagar, from the ICMR-National Institute of Epidemiology, told the Reuters news agency.

Japan widened COVID-19 curbs to several towns and cities, including Tokyo, as it battles a record wave of omicron infections.

The country has resisted complete shutdowns, instead focusing on requiring restaurants and bars to close early and not serve alcohol.

It also urged the public to wear masks and practice social distancing.

A sharp rise in infections has begun to paralyze hospitals, schools and other sectors in some areas.

New Zealand called off the national cricket team's tour of Australia before the scheduled first match because of strict COVID-19 quarantine requirements.

The Black Caps, as they are commonly known, would not have had to isolate on their return home when the tour was first announced.

The spread of the omicron variant in Australia has caused New Zealand's government to defer a plan to introduce quarantine-free travel between the countries.