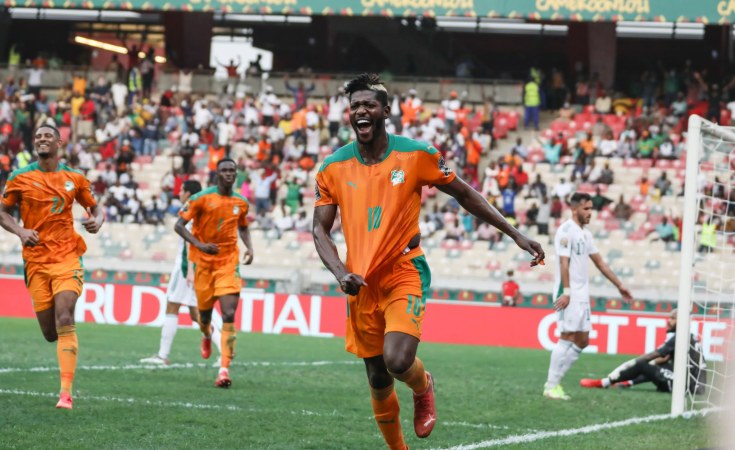 CAF Online
Cote d'Ivoire players in a match against Algeria at the TotalEnergies Africa Cup of Nations on January 20, 2022.
Confederation of African Football (Giza)

Cote d'Ivoire beat Algeria 3-1 to finish top of Group E and eliminate the title holders from the TotalEnergies Africa Cup of Nations, Cameroon 2021.

The Elephants produced a dominant performance in Douala to sink the reigning champions with goals from Franck Yannick Kessie, Ibrahim Sangare and Nicolas Pepe.

The Elephants marauding left back Chislain Konan twice found space inside the Algeria box. Konan beat Algeria's Atal on the right to play in Pepe whose first time effort missed the target on 7 minutes.

Aissa Mandi latched on to a quickly taken Ismael Bennacer free kick only for Simon Desire to clear for a corner.

The Elephants continue to counter the Desert Foxes with their wide players giving them width as they pushed for the breakthrough.

Kessie broke the deadlock with a clinical strike after an exchange of passes with Pepe to beat Rais Mbolhi and give Cote d'Ivoire the lead on 22 minutes.

Djamel Belmadi's side responded with chances of their own as they push for the equaliser.

Bennacer had a shot flashed the Elephants goal while Belaili failed to connect to Atal's inviting diagonal pass into the area.

Ibrahim Sangare doubled the lead for the Elephants with a thumping header past Mbolhi five minutes before the break.

Cote d'Ivoire continued to dominate the second half and they found the third goal on 53 minutes through Pepe.

The winger drifted inside from the right to curled his left footed strike past Mbolhi to make it 3-0.

Algeria were awarded a penalty following a foul on Belaili on 57 minutes. Captain Riyad Mahrez struck the post as Cote d'Ivoire hang on to their three goal advantage.

Substitute Soufiane Bendebka pulled a goal back for the Desert Foxes but it was too late for the 2019 African champions.

The victory confirmed top spot for Cote d'Ivoire ahead of Equatorial Guinea who beat Sierra Leone 1-0 in Limbé to finish second. The Leone Stars finish third with two points and Algeria bottom with a point.

"Today, we must highlight the successful collective work of a great team from Côte d'Ivoire. We won this match together, we fought together. We are also in the process of gaining momentum in this competition where we arrived unprepared. That's why the beginnings were difficult and it must get better and better.

"It's an almost perfect match, a lot of satisfaction, heart and courage. Unlike other matches, we managed to put in the necessary ingredients with success at the end. Tonight, a lot of positive things and if we continue like this, we can have something at the end. On this meeting, unlike Algeria who lacked confidence, we entered the game, with less negative pressure being assured of qualification."

"It is simply a failure, difficult to make a rational analysis on the spot. We were keen to catch up on this match after a difficult start but the big problem, we did not manage to materialize our chances and even the penalties did not enter, doubt set in, we never managed to enter this competition".

Previous Story
Next Story
Debutants Gambia Beat Tunisia, Get Historic Berth in the Round of 16

Debutants Gambia Beat Tunisia, Get Historic Berth in the Round of 16