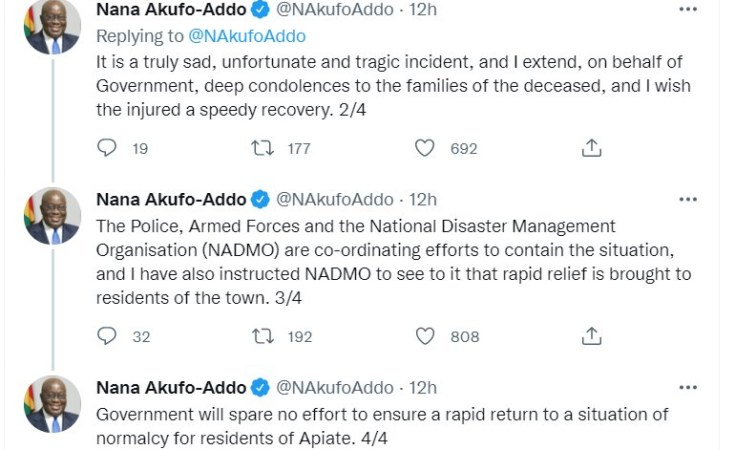 A mining truck collided with a motorcycle, setting off an explosion that razed hundreds of nearby buildings. President Nana Akufo-Addo has called it a "tragic incident."

A truck carrying explosives for a gold mine crashed with a motorbike in Ghana on Thursday triggering an explosion that left hundreds of buildings damaged and several people dead, officials said.

The blast caused "the loss of lives and the destruction of properties," President Nana Akufo-Addo said in a tweet, adding: "It is a truly sad, unfortunate and tragic incident."

He added that the "government will spare no effort to ensure a rapid return to a situation of normalcy for residents."

What do we know?

The incident happened around noon in the west of the country, near the city of Bogoso, about 300 kilometers (180 miles) west of the capital, Accra.

Police said a "preliminary investigation has established that a mining explosive vehicle ... collided with a motorcycle, resulting in the explosion."

Police also said that "most of the victims have been rescued" and taken to nearby hospitals. They also urged the public "to remain calm."

Seji Saji Amedonu, deputy director-general of the National Disaster Management Organisation, told Reuters news agency that some 500 buildings in the area had been knocked down in the blast.

The truck involved in the crash and explosion was en route to the Chirano gold mine.

A spokesperson for Kinross, the company that runs the mine, confirmed that the incident occurred some 140 kilometers from the mine.