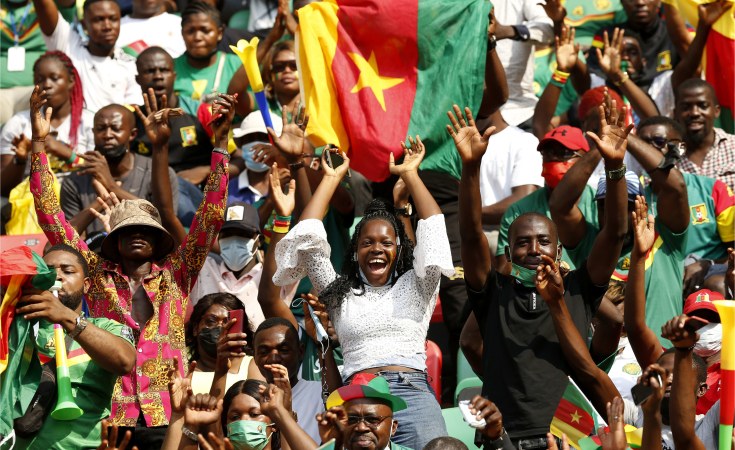 Yaoundé — Cameroon says that within four days, at least 1,500 football supporters have entered the country from neighboring Equatorial Guinea and Gabon to support their teams that have advanced to Round 16 in the Africa Football Cup of Nations, or AFCON. Gabon battles Burkina Faso Sunday, while Equatorial Guinea plays against Mali Wednesday. Tournament organizers require all fans to have COVID-19 tests before entering stadiums.]

The immigration police said about 600 other football fans from Gabon and Equatorial Guinea arrived in Cameroon by sea and by air this week.

Cameroon says the influx came after Gabon and Equatorial Guinea qualified for the knockout stage of the Africa Football Cup of Nations, or AFCON, in Cameroon. Gabon played a 2-2 draw Tuesday against Morocco in Yaoundé, and both teams advanced.

Thirty-year-old Prosper Ebang is among the 1,500 supporters from Gabon and Equatorial Guinea Cameroon police say have entered Cameroon. Ebang says he wants to be part of a continental soccer event in which his country's national football team, the Panthers of Gabon, are doing well.

Ebang says no citizen who loves Gabon can be indifferent when the Panthers are making Gabon proud with the excellent football exhibited in Cameroon during AFCON. He says he is certain that Gabon will reach the AFCON final if Cameroon continues providing a conducive environment for the games.

On November 30, 2021, Cameroon said Equatorial Guinea was deporting thousands of Cameroonians who were living in the neighboring state illegally, citing national security concerns. Authorities in the capital, Malabo, said the Cameroonians fled conflict in western Cameroon, where government troops have been fighting anglophone separatists.

Videos from Cameroonians deported from Equatorial Guinea flooded social media platforms including Facebook and WhatsApp. In the video, Cameroonians claiming to have been forcibly sent out of Equatorial Guinea promised to chase football fans from the neighboring country visiting Cameroon for AFCON from January 9 to February 6.

Kisito Esua is president of the nongovernmental organization South West Youth League, headquartered in Limbe, an English-speaking southwestern town. Esua says the league is teaching youths to be hospitable to fans coming to Cameroon to support their football teams. He spoke via a messaging app from Limbe.

"The influx of fans and supporters from Gabon and Equatorial Guinea is so massive," said Esua. "The fans have been coming in in their numbers by air, land and sea and we think that the turnout tomorrow will be something spectacular. So, we have made sure that the environment is so friendly, convivial and conducive."

Cameroon's Public Health ministry says the supporters who have arrived within the past 48 hours must respect COVID-19 restriction guidelines imposed by the Confederation of African Football. CAF says people must provide negative COVID-19 test results that are not more than 24 hours old as well as proof they have been vaccinated against COVID-19 to gain access to stadiums for AFCON matches.

The embassies of Gabon and Equatorial Guinea in Yaoundé say all the visiting fans have agreed to respect Cameroonian laws and COVID-19 restrictions instituted by Cameroon and CAF during their stay.