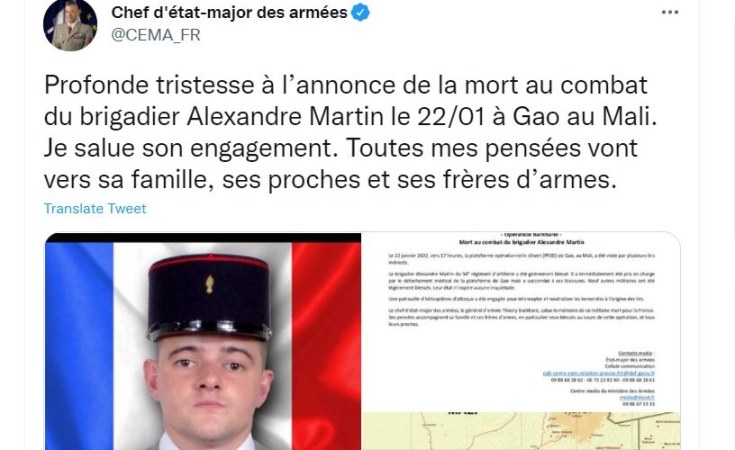 A French soldier has been killed in a mortar attack on a military camp in Gao, northern Mali, the Elysée Palace announced Sunday. Brigadier Alexandre Martin had been serving in France's Barkhane operation in the restive Sahel region.

In a statement, President Emmanuel Macon "respectfully saluted" the memory Brigadier Martin, saying he "joined in the grief of his family, his loved ones and his brothers in arms".

Although the exact circumstances of the incident, which took place Saturday, were unclear, authorities pointed to a jihadist attack.

Macron said he confirmed the determination of France to continue the fight against terrorism in the region.

More than 4,000 French forces are stationed in the Sahel region of West Africa, most of them in Mali.

Paying fresh tribute to French troops in West Africa, the Elysée saluted the courage of the soldiers in the Sahel, saying the President had expressed his "total confidence in them".

Paris has started reducing its presence in Mali, hoping to halve the contingent by the summer of 2023, and has asked its European Union allies to provide more support.

It is now mulling an earlier exit amid rapidly deteriorating relations with the military junta that has ruled the country since a coup in August 2020.