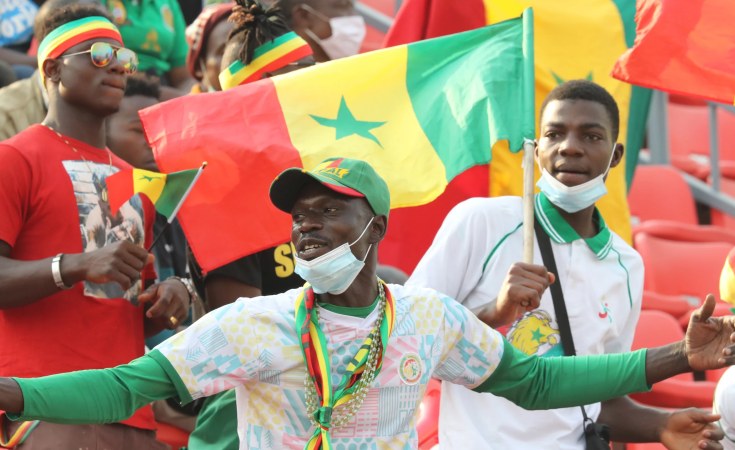 CAF Online
Spectators at a match between Senegal and Cape Verde at the TotalEnergies Africa Cup of Nations on January 25, 2022.
Confederation of African Football (Giza)

Senegal roared into the quarterfinals of the TotalEnergies Africa Cup of Nations after defeating Cape Verde Cape 2-0 at the Stade Omnisports de Bafoussam in a round of 16 match on Tuesday.

The match was played on the backdrop of a somber atmosphere as the two teams observed a moment of silence ahead of kickoff in memory of the victims of the Olembe Stadium incident which happened last night.

The Teranga were first to get an opening in the game when Sadio Mane saw his shot come off the post a minute into the game. Cape Verde were already on the back foot and suffered a blow when they were reduced to 10 men, Patrick Andrade getting a red card.

Very few chances followed as neither side couldn't find the net in the first period. Papa Gueye had a go in the six yard box just before halftime but his effort was high.

Senegal continued to press forward in the second half but couldn't register any shot on target at the hour mark.

The Blue Sharks had a rare chance in the 53 minute with Ianique dos Santos Tavares heading wide. Cape Verde then saw another red card with Josimar Dias getting an early shower. After a VAR check, the red card stood despite the protests from the Islanders.

Eventually, Cape Verde cracked and with a shortage in personnel, Sadio Mane opened the scoring with a right footed effort from a set piece situation.

Cape Verde coach Pedro Brito in trying to make some tweaks to the team brought on Júlio Tavares in the place of Kenny Rocha Santos, and Lisandro Semedo for Ryan Mendes.

Idrissa Gueye had an opportunity to add a second for Senegal 4 minutes before the full-time whistle but his attempt went few inches wide of the goal.

Cape Verde also had an opportunity to equalizer but substitute Julio Tavarez saw his shot saved by Edouard Mendy in the Senegal goal.

Senegal did get their second goal with substitute Dieng scoring in stoppage time to ensure Senegal carry the day in Bafoussam.

"We are delighted as a team to have qualified for the quarterfinals and on a personal note I am happy to have earned the man of the match away in what was a good and well-coordinated game with my teammates. We will continue to improve with every game as we hope to go all the way in the competition".

"First, I would like to congratulate Senegal for the victory, but I also want to congratulate my players for what they did in the game. The match started with Senegal attacking but we tried to balance things and succeed but things turned midway when we got the red cards that affected our game plan. It became difficult after the second red card we totally lost control. We hope to make amends and learn from the tournament as we prepare ourselves for our next schedule"

"We started the match on a good note as we started with intensity and a renewed sense of urgency. I told my players to play with speed and press our opponents and that paid off handsomely as we exhausted our opponents. Today it was very important to manage the game from the start and that is how Senegal made the difference. I am proud of my players as they followed the instructions from start to the end. In the quarter-finals we want to employ the same tempo and hardwork to be able to get another convincing win ".