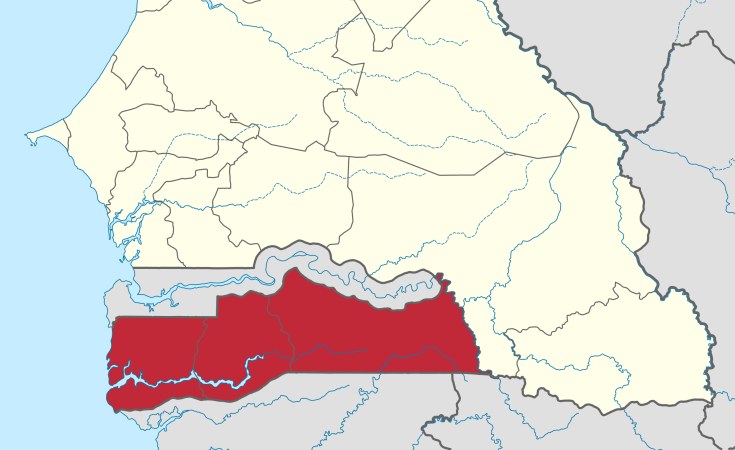 NordNordWest / Wikimedia Commons (CC BY-SA 3.0)
A map showing the location of the Casamance region in Senegal (pale yellow). The region lies on the border with Gambia (in grey above Casamance in red).
Deutsche Welle (Bonn)

The Senegalese soldiers were likely attacked by separatist rebels while on a mission in neighboring Gambia. Authorities believe the soldiers may have been taken hostage.

The Senegalese military said Tuesday two of its soldiers were killed and nine went missing during an operation in neighboring Gambia.

What do we know so far?

The army blamed the acts on the Movement of Democratic Forces for Casamance (MFDC) separatist group.

"The nine missing soldiers are probably held hostage by the MFDC. Operations are ongoing to find them and secure the zone," the Senegalese military said.

The Senegalese soldiers were on a mission against illegal timber trafficking in Gambia when they clashed with the rebels on Monday.

The army also said one MFDC rebel was killed and three were captured during the fighting.

Who are the MFDC?

The MFDC was started in 1982, with the group fighting for independence for the southern Senegalese region of Casamance, which lies on the border with Gambia.

Casamance is home to the Jola ethnic group , a small minority in Senegal.

Gambia serves as a base for the MFDC, who fund themselves through timber trafficking in the region. In May 2014, one of the leaders of the MFDC called for a cease-fire, yet some low-level fighting still persists.

The Senegalese soldiers are part of a peacekeeping mission called ECOMIG, which is backed by the Economic Community of West African States (ECOWAS).

The soldiers were first deployed to Gambia in January 2017, after former dictator Yahya Jammeh refused to step down following his loss to Adama Barrow in a presidential election the previous year.