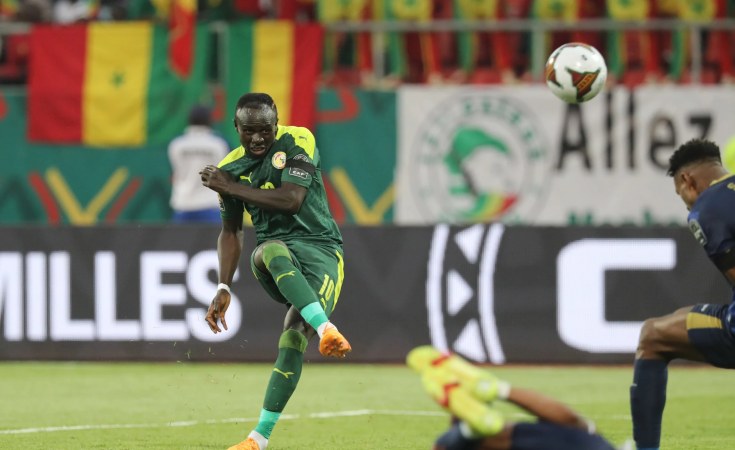 The Teranga Lions defeated nine-man Cape Verde while Morocco had to come from behind to see of a spirited Malawi side.

Senegal eased past Cape Verde to progress to the quarterfinals of the Africa Cup of Nations (AFCON) Tuesday.

Star striker Sadio Mane survived a clash of heads with Cape Verdean goalkeeper Vorzinha to put his side ahead in their round of 16 game at the Baffoussam Stadium.

The Liverpool forward suffered what looked like concussion after the clash that saw the goalkeeper sent off.

Both men challenged for an aerial ball and ended up on the turf, with Mane looking dazed as he crumpled to ground. Vorzinha was the worse for wear as he was taken out and then shown a red card after VAR showed he was at fault.

Despite him looking uncomfortable, Senegal opted to leave Mane on the pitch, and he scored the opener six minutes later. He was substituted shortly after he fell on the field once again.

Cape Verde's Patrick Andrade had been sent off in the first half for a dangerous tackle, leaving his side to defend for most of the game even as the Teranga Lions failed to find the breakthrough with their numerical advantage.

Tuesday's matches paid homage to the fans who died after a stampede during Monday's game between Cameroon and Comoros at the Olembe Stadium.

Achraf Hakimi's freekick handed Morocco a 2-1 victory against Malawi at the Ahmadou Ahidjo Stadium in Yaounde.

Malawi had taken an early in spectacular style lead through Gabadinho Mhango. The striker saw goalkeeper Yassine Bounou off his line and hit a long range strike into the net to send his side into rapturous celebrations.

The Atlas Lions fought back, however. They dominated the game in search of an equalizer but were met by robust defending from the Malawians with their goalkeeper Charles Thomu having to make several saves.

The Flames eventually caved under the incessant pressure when Youssef En-Nesyri sent a header into the roof of the net in first-half stoppage time.

Malawi can be proud

The Flames came into the tournament as the 123rd ranked team in the world. They had never played beyond the group stages of the AFCON and proved that they could mix it up with the bigger teams this year.

Appearing at their third championship, Malawi lost their first game 1-0 to Guinea before defeating Zimbabwe 2-1 and holding Senegal to a goalless draw. They came with a squad of players from the domestic league as well as the South African Premier Soccer league.

Their star man Mhango, who plays for Orlando Pirates, left the tournament having scored twice. His long-range strike against Morocco will live long in memory as one of the best goals of the tournament.