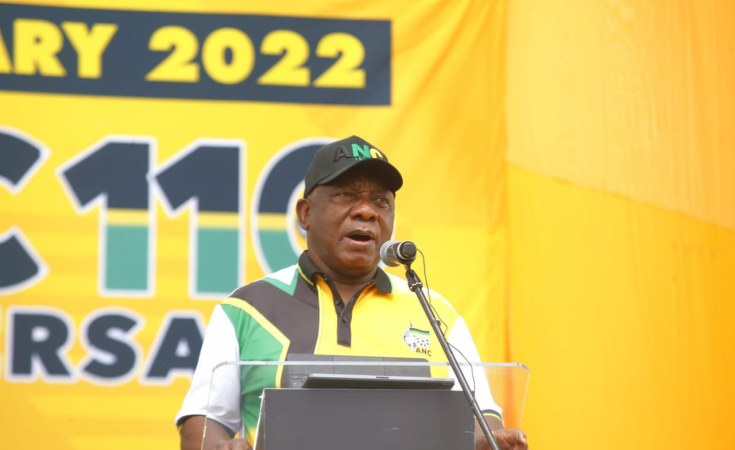 The country could be on the cusp of major political change - but the ANC is likely to remain dominant.

What does South Africa's future hold? Can it move away from corruption and political infighting and on to a path of economic growth and stability? At a 26 January roundtable with top political analysts and economists, the Institute for Security Studies (ISS) tested its latest country forecasts to the 2024 and 2029 national election results.

South Africa is struggling with corruption, poor governance and mismanagement. The African National Congress (ANC) - the ruling party since 1994 - is in deep crisis. In the 2021 local government elections, support for the ANC fell below 50% for the first time, and prospects for Africa's oldest liberation party are dim.

Of the four trajectories discussed at the roundtable, the consensus was that the country's most likely future - the Bafana Bafana scenario - holds. (The scenario was named after South Africa's perennially underperforming national soccer team.)

On this path, the dominant ANC faction led by President Cyril Ramaphosa gains the upper hand in the December internal party elections, and he leads the party to national elections in 2024. That would set him up to remain ANC head to December 2027 when new leadership is elected ahead of the 2029 national polls. If past trends hold, Ramaphosa will step down early in 2028 to make way for a new ANC president anxious to get their hands on the levers of state power.

The ANC is increasingly a coalition of self-interest, with no clear vision of its role or SA's future

The dominant question then is perhaps not if Ramaphosa will retain ANC leadership, but who will be his deputy and the rest of the so-called Top Six? The party has a strong tradition that the deputy becomes president, so all eyes are on that position.

The ANC is still South Africa's largest party by a substantial margin. But it's increasingly dependent on a rural support base, local business and factions from the former homelands to maintain its support. Accusations against Ramaphosa include weak leadership, the damage to service delivery of cadre deployment, and all-consuming factional infighting. Elections have become a life-or-death struggle.

In addition to corruption, governance failure and voter apathy, the ANC's decline in support can be linked to a steady increase in so-called born-free voters. To an outsider, the ANC of 2022 is increasingly a coalition of self-interest, without a clear vision of its role or South Africa's future. It provides no inspiration.

Given their age, few leaders in consideration in 2022 may contend the 2027 ANC electoral conference

In the Bafana Bafana scenario, Ramaphosa emerges with significantly more support than any other candidate, but with a Top Six and a National Executive Committee that continue to reflect stark divisions. The result is a poorly disciplined and uninspiring team with no clear strategy and bad implementation.

These prospects will fill investors, the private sector and many South Africans with trepidation. They'll contribute to further loss of ANC support in the 2026 local government elections, where its fortunes plummet to a mere 38%. The divisions in the party persist, bleeding through into policymaking, government effectiveness and development prospects.

In this scenario, faced with further losses in the 2029 polls, the ANC's 2027 party electoral conference would probably be a messy and contested affair. New faces may emerge among the Top Six. Given their age and health, few (or none) of the top leaders in consideration in December 2022 may survive that reckoning.

South Africa grows and things improve, but slowly. Hesitant reform is the order of the day given the need for constant consultations and compromises to retain unity within the ANC.

After the 2029 elections, South Africa and the ANC are at a momentous inflection point

Gauteng is where the action will be in the 2024 national elections. The Bafana Bafana election forecast for that province shows ANC support at around 42%. At that level, the party is left with a difficult choice. It is probably the only one able to form a governing coalition but needs one of the larger opposition parties for that - e.g. the Democratic Alliance (DA), Economic Freedom Fighters (EFF) or ActionSA.

Nationally the ANC continues its decline, as does the DA, though more slowly. The EFF holds on to its current support base, the Inkatha Freedom Party (IFF) grows in KwaZulu-Natal province, and ActionSA emerges as a national party with 6% support in 2024 and 8% in 2029. The political landscape continues to fracture even as the ANC under a new president in 2029 still gets more votes than any party, at 43% (172 out of 400 seats in the National Assembly).

After the 2029 elections, the ANC faces a stark choice since it needs the support of one of the larger opposition parties to govern. At that point South Africa and the ANC are at a momentous inflection point.

At the provincial level, the Western Cape remains under DA control in 2024 and does even better in 2029 as the Good Party collapses after Patricia de Lille retires from active politics. In KwaZulu-Natal, the ANC is forced into an alliance with the IFP after the 2024 elections to get to a governing majority, and has to make numerous compromises in allocating provincial portfolios to achieve that goal.

The ISS roundtable briefly discussed the prospects for renewal in the ANC's Top Six, including the election of a capable deputy president. That, coupled with a more decisive win for Ramaphosa's reformist wing, could set the ANC on a different trajectory - one we called the Thuma Mina scenario. This is the second most likely outcome.

In that scenario, the ANC regains much of the urban black vote and possibly even boosts its support in 2024. The result is that the party retains its national majority in 2024, including in Gauteng, while the DA, ActionSA and EFF struggle. This outcome is unlikely but not impossible and will require much more decisive leadership than is currently evident.

Underlying the discussions was a concern that the space to turn South Africa's futures around from its current negative trajectory is shrinking. Politics is shifting away from the formal contestation between the current crop of established parties on which much of the ISS' recent analysis is founded. This means that, like with all forecasts, a healthy scepticism is needed.

This article is funded by the Hanns Seidel Foundation and the Swedish International Development Cooperation Agency. The opinions and statements in this article do not necessarily reflect those of the HSF. The ISS is also grateful for support from the members of the ISS Partnership Forum: the Hanns Seidel Foundation, the European Union, the Open Society Foundations and the governments of Denmark, Ireland, the Netherlands, Norway and Sweden.