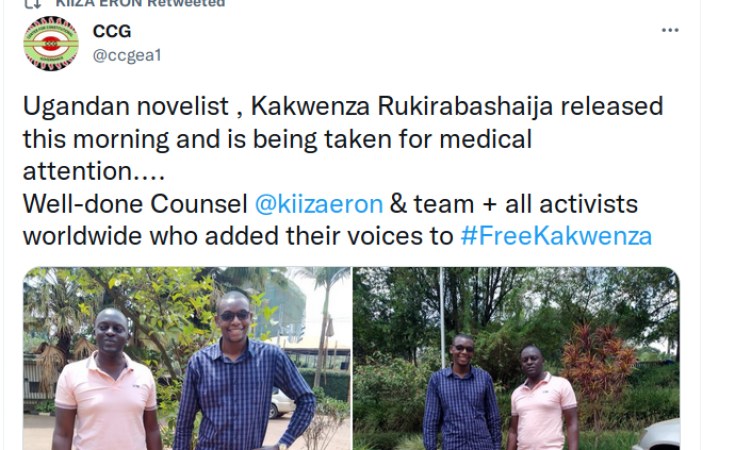 Kakwenza Rukirabashaija has been taken to a hospital in Kampala after being beaten in prison, his lawyer said. The writer's treatment after being detained on trumped up charges has prompted an international outcry.

Ralf Nestmeyer, vice president for PEN in Germany, then questioned "whether he can get that in Uganda."

Nestmeyer said that the group was "trying to support him" as best it could.

The comments from the freedom of expression NGO came a day after Rukirabashaija's lawyer said the writer had been "dumped" by the military at his home in eastern Uganda.

"We have taken him to hospital in Kampala," Eron Kiiza added. Kiiza has said that Rukirabashaija was tortured while in pre-trial detention over trumped up charges after he insulted Uganda's ruling family on social media.

Many believe that Muhoozi Kainerugaba, a lieutenant general in command of the Ugandan military's special forces, is being groomed to take over from his father Museveni, 77, who has been in power since 1986.

Held without charges for weeks

Rukirabashaija was detained in December and held without charges until January 11, prompting an international outcry to release the winner of the PEN Pinter award as an "international writer of courage."

The author was charged with "offensive communication," and a court ordered his release pending trial. Despite the court order, his lawyer said, Rukirabashaija was picked up from prison and held at an army barracks for several more days.

This is not the first time Rukirabashaija has been detained. In 2020, after his satire of Museveni's rule titled The Greedy Barbarian garnered international acclaim, he was arrested for breaching COVID social distancing rules, inciting violence and promoting sectarianism.

Rukirabashaija has said he was tortured in that instance too.

Previous Story
Ugandan Novelist Rukirabashaija Recovering From 'Torture'
Next Story
Kakwenza Dumped At His Gate in the Wee Hours of the Night, Rushed to Hospital

Kakwenza Dumped At His Gate in the Wee Hours of the Night, Rushed to Hospital